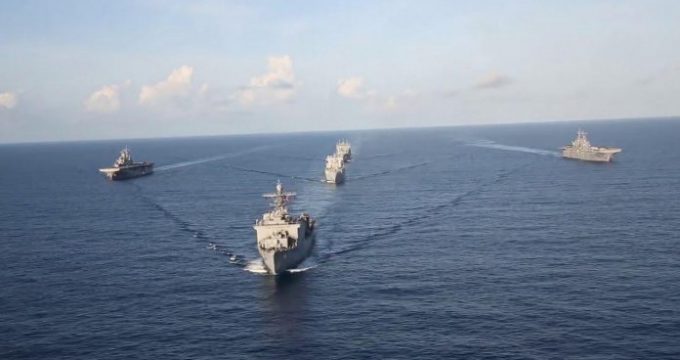 Iran Front Page – The US Navy has sent its P8-Poseidon patrol aircraft from the VP-26 Tridents as well as four warships to the Caribbean region for possible encounter with a group of Iranian super-tankers moving fuel to Venezuela, a report says.

Iran’s Fars News Agency claimed in a report on Saturday that the US Navy has deployed its USS Detroit (LCS-7), USS Lassen (DDG-82), USS Preble (DDG-88), and USS Farragut (DDG-99) to the region along with P8-Poseidon.

The report quoted its military and political analysts as saying that any encounter with the Iranian tankers will spark a reaction that may endanger US President Donald Trump’s campaign ahead of November elections.

Reports of a shipment of Iranian fuel to Venezuela in the face of US sanctions against the two allies have infuriated the United States, with one official threatening to take “measures” against the “unwelcome” development.

The vessel tracking data from analyst Refinitiv Eikon suggests the tanker loaded fuel at Bandar Abbas port in Iran at the end of March, and sailed through the Suez Canal and entered the Atlantic on Wednesday.

A senior official in US President Donald Trump’s administration told Reuters on Thursday that the United States was considering measures against Iran in response to the fuel shipment. The official spoke on condition of anonymity.

The official said Washington has a “high degree of certainty” that the Venezuelan government is paying Iran in gold for the fuel.

Both Iran and Venezuela are under the US sanctions.