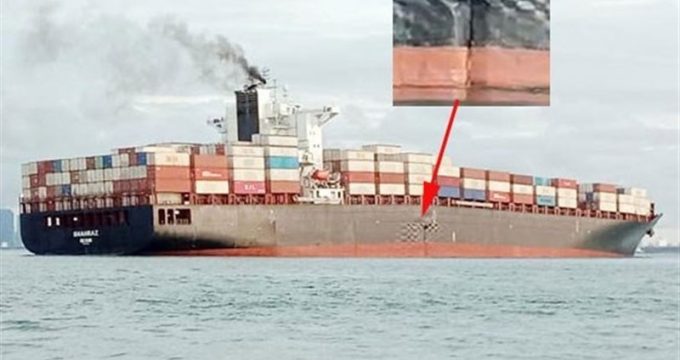 Crew safe after Iranian container ship runs aground near Singapore

Tasnim – CEO of Iran’s Ports and Maritime Organization (PMO) said the crew of an Iranian freighter are safe after the cargo ship ran aground off the coasts of Singapore, noting that the vessel’s hull has been damaged in the incident.

The Iranian container ship has veered off course at the Singapore Strait and has run aground, but the crew are safe and sound, Mohammad Rastad announced.

In a statement on Thursday, the Islamic Republic of Iran Shipping Lines (IRISL) said the ship run by the company had been grounded in Singapore Strait on May 11 due to technical problems.

“However, this incident caused no corporal or environmental damage,” said the statement, adding that the loss suffered by the ship is covered under “credited international insurances.”

It said that the situation for the ship was now fully under control and it would soon be refloated, Press TV reported.

Earlier reports suggested that the Iranian ship Shahraz ran aground in the Indonesian territorial waters after trying to avoid a collision with an Indonesian bulk carrier.

A spokesperson of the Maritime and Port Authority of Singapore confirmed on Thursday that the incident had caused no injury or pollution.

Other sources said the grounding of the ship had caused no disruption to the traffic in the Singapore Strait although vessels sailing in the vicinity have been issued with a warning to keep the required distance.

A report on the Offshore Energy website said that the heavily-loaded Shahraz, a 6,572 TEU boxship built in 2008, would probably need to be lightered before it can resume sailing.

The report described the financial losses that resulted from the grounding as considerable, saying it could be a “total loss” for the insurer.

It said the Indonesian bulker involved in the incident had no visible traces of damage, allowing it to refloat and anchor off Indonesia’s Batam.