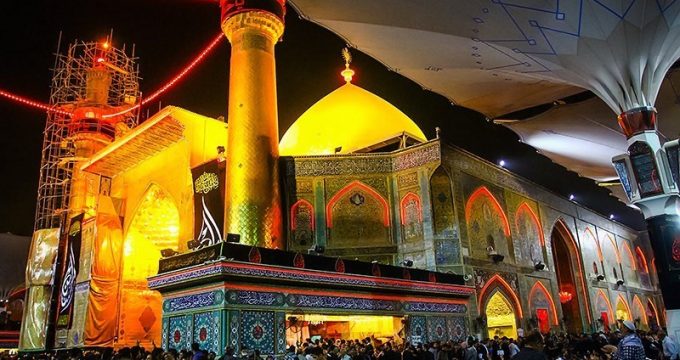 MNA – Amir al-Momineen Imam Ali ibn Abi Taleb (BPUH) was martyred on 21st Ramadan 40 A.H. by an assassin who mortally wounded the Holy Imam (PBUH) with a poisoned sword in the Mosque at Kufah during morning prayers on 19th Ramadan 40 A.H.

On this Sorrowful and Sad occasion of the Martyrdom Anniversary of Imam Ali (PBUH), we extend our Heartfelt Condolences to Muslim Ummah across the world.

Heartfelt condolences to Muslims across the world on the tragic 21st of Ramadan, the martyrdom of the most perfect and meritorious person after the Almighty’s Last and Greatest Messenger to mankind, Prophet Muhammad (S).

Imam Ali (PBUH), the First Muslim, an intimate associate of the Holy Prophet of Islam (S) in the life and holy Islamic mission, the Immediate Successor to the Holy Prophet of Islam (S) and the First Holy Immaculate Imam of the Shi’ites in the World was born inside the Holy Kaaba at Makkah on Friday, the 13th day of Rajab, 600 A.D. Imam Ali (PBUH) is the only unique personality in the world who was born in the Holy Kaaba and was martyred in the Kufah Mosque and was buried in the holy city of Najaf-e-Ashraf (Iraq).

This Auspicious Occasion also coincides with “The Nights of Honor and Power” (Shabhaye Qadr: 19th, 21st and 23rd nights of the Holy Month of Ramadan) in which the fate of everyone is decided. We pray Allah Almighty to grant forgiveness, salvation, deliverance, dignity and prosperity to all the Muslims in the world.

Angels cried when his head was split while engrossed in the Morning Prayer on the 19th of Ramadan by the poisoned sword of a renegade, and when his soul flew to the ethereal heavens they lined in rows to welcome it. In the words of his elder son and successor, after laying him to eternal rest in the dead of night:

“There has died tonight a man who was the first among the early in (good) actions. Nor did any later (believers) attain his level in (good) actions… He, peace be on him, has died on this night on which (Prophet) Jesus, son of Mary, was taken up (to heaven), on which Joshua, son of Noon, the testamentary legatee of (Prophet) Moses, peace be on him, died. He has left behind no gold or silver except seven hundred dirhams of his stipend, with which he was intending to procure a servant for his family.”

The words you heard are the tribute of a bereaved son for his departed father. This is how Imam Hasan al-Mujtaba (PBUH) summed up the merits of the One and Only Commander of the Faithful, Imam Ali ibn Abi Taleb (PBUH), on whose martyrdom anniversary we are clad in black these days, with public holiday declared in the Islamic Republic of Iran. In Najaf, in Iraq, where he rests in eternal peace, the atmosphere is full of grief, with tens of thousands of devotees paying respect to him. Imam Ali (PBUH) even in the last moments of his life, did not feel bitter nor neglected the commandment of God. As the man who was Islam personified, in the state of acute pain he said:

“I advise you to fear Allah. Do not go after this vicious world though it may try to entice you. Do not seek it though it may seek you and do not grieve over and pine for things which this world refuses you. Let the eternal Reward and Blessings of Allah be the prompting factors for all that you say and do. Be an enemy of tyrants and oppressors and be a friend and helper of those who are oppressed and tyrannized.

Here is part of what he said while leaving the mortal world, on being struck in the state of ritual prayer in the Mosque of Kufa, in the fasting month of Ramadhan by the poisoned sword of the renegade Ibn Muljam al Moradi, after expressing that immortal phrase Fuzto wa Rabb-il-Ka’ba, which means by the Lord of the Ka’ba I have succeeded:

“As for my last will, it is that concerning Allah, do not believe in a partner for Him, and concerning Mohammad (S) do not disregard his Sunnah. Keep these two pillars and burn these two lamps. Till you are not divided, no evil will come to you… I am departing from you like one who is eager to meet (someone). Tomorrow you will look at my days, then my inner side will be disclosed to you and you will understand me after the vacation of my place and its occupation by someone else.”

This was Imam Ali (PBUH), the Doyen of Justice, who said that even if the rule of the seven climes were to be given to him on condition that he take out a mere morsel of food from the mouth of an ant, he would never do so. He lived a simple life, wore coarse clothes, and ate meager food devoid of delicacies, despite being the ruler of a realm spreading from North Africa to Central Asia. The book Nahj al-Balagha that contains his letters, sermons, and maxims, is proof of his knowledge, wisdom, prudence, piety and patience, in addition to unsurpassed eloquence that is regarded by Arab literati, as next only to the Revealed Words of God Almighty. His words are bezels of wisdom and are keenly studied till this day. For instance, we read in letter 47 of the Nahj al-Balagha:

“Develop mutual liking, friendship and love, and help one another. Take care that you do not spurn and treat one another badly and unsympathetically. Exhort people to do good and abstain them from evil, otherwise the vicious and the wicked will be your overlords and if you willingly allow such persons to be your rulers then your prayers will not be heard by Allah.”

The greatness of Imam Ali (BPUH) is greater than one could imagine. The magnanimous cousin and Divinely-Decreed Successor of the Seal of Messengers, continued to give precious advice to the usurpers for the sake of Islam, advising the Second Caliph against personally participating in the wars against the Romans and the Persians, for obvious reasons, when ordinary mortals would have wished for calamities to befall the deprivers of their rights. For the sake of God, Prophet and Islamic unity, he refused to take by force his usurped right in order to save the neo-Muslim Arabs from reverting to paganism, even when the regime stormed his house with fire and crowbars, and mortally injured his wife, the Prophet’s daughter, by smashing the door upon her.

They assassinated Imam Ali (PBUH) at his finest time – the hour of standing before Allah, the Exalted, during a prayer of submission, in the best of days, while fasting during the month of Ramadan; during the most glorious Islamic duties, while preparing to wage jihad, and in the highest and purest divine places, the Mosque of Kufa.

May joy be to Amir al-Muminin Imam Ali bin Abi Talib (PBUH) and a blessed afterlife!

The crime of assassinating Imam Ali (PBUH) remains one of the cruelest, brutal and hideous acts, because it was not committed against one man, but against the whole rational Islamic leadership.

By assassinating Imam Ali (PBUH), they actually aimed at assassinating the message, the history, the culture and the nation of Muslims embodied in the person of Imam Ali bin Abi Talib (PBUH). In doing so, the Islamic nation lost its guide of progress, and at the most wondrous opportunity in its life after the Holy Prophet (PBUH).

Imam Ali (PBUH) suffered from his wound for three days, and He (PBUH) passed away on 21st of the month of Ramadan at an age of 63 years.

During these three days, Imam Ali (PBUH) entrusted his son, Imam Hassan (PBUH) with the Imamate of guiding the nation ideologically and socially. During those three days, as during all his life, he never ceased remembering Allah, praising Him, and accepting Him and His ordinance.

Likewise, he continued giving pieces of advice and directions leading to good, pointing to the right, defining the way to guidance, explaining the course for deliverance, calling for the observance of Allah’s ordinances, and warning against following one’s ill desires and set-backs from not carrying out the divine message.

Such was the heroic end of this great man! The loss to the Mission and the nation was the gravest after the loss of the Holy Prophet (PBUH).

We express our heartfelt condolences on the martyrdom anniversary of Imam Ali [PBUH] to all Muslims and freedom-seekers in the world.