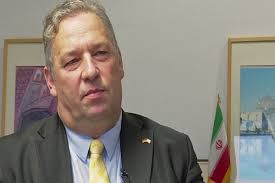 Trade exchange vol. between Iran, Germany to hike by 15% in coming months

MNA – It is predicted that trade volume exchange between Islamic Republic of Iran and Germany will rise by 15% in the coming months.

Iran-Germany Chamber of Commerce predicted that bilateral trade volume exchange will register a 15 percent hike in 2020 due to the suitable infrastructures of Iranian financial institutions.

According to the Federal Government of Germany, Iran-Germany economic ties have been ameliorated despite the cruel and unjust US sanctions.

Statistics showed that trade volume exchanged between Iran and Germany in the 1st three months of the current year in 2020 hit €394 million.

A member of Board of Directors of Iran-Germany Chamber of Commerce Michael Tockuss said, “the two countries of Iran and Germany mainly exchanged pharmaceutical products over the past months and it is hoped that other products will be added to the volume of bilateral exchanges by facilitating terms and conditions of financing.”

He went on to say that Iranian banks have acted efficiently than their German counterparts in setting up infrastructures ad financing exports.

According to estimates, trade volume exchanged between the two countries of Iran and Germany will record about 15 percent growth in current year in 2020, he emphasized.