Euronews | Ambassador G.Hossein Dehghani: 8 May 2020 marked the second anniversary of the US withdrawal from the Joint Comprehensive Plan of Action (JCPOA), or the Iran Nuclear Deal, and the re-imposition of all US sanctions that had been lifted in concert with the treaty. It is a well-substantiated and globally acknowledged fact that the US is no longer a JCPOA participant, and I do not intend to discuss the obvious here. Instead, I would like to dissect the idea of balance, which is the vital element for the successful implementation – or under current circumstances the survival – of the JCPOA.

From a textual perspective, this balance is struck between Iran’s nuclear commitments and its enjoyment of economic benefits thereof. This is essentially a rather legal take on the idea of “balance” in the nuclear deal and fails to capture the overall goal and ambitions as perceived by the agreement. There is more to the JCPOA than it is narrowly perceived through perusal of its meticulously fashioned text.

To better comprehend the current situation, we should look at the nuclear agreement in its wider political, security and economic context. The JCPOA was only a means to an end, not an end in itself. From a security and economic perspective, the JCPOA is set to yield the bulk of its positive outcomes on multi and bilateral fronts. That is to say, in return for the temporary and voluntary measures taken by Iran beyond its commitments under the Non-Proliferation Treaty (NPT) and the Safeguards Agreement, all international restrictions and constraints against Iran – including, amongst other things, the automatic termination of the arms embargo on 18 October 2020 – will be terminated according to an established timetable.

On the economic plane, the deal was envisioned as a path towards the normalisation of trade and economic relations with Iran. In this context, the idea of balance is tied to the 2012 status quo ante when the EU was Iran’s biggest trade partner. 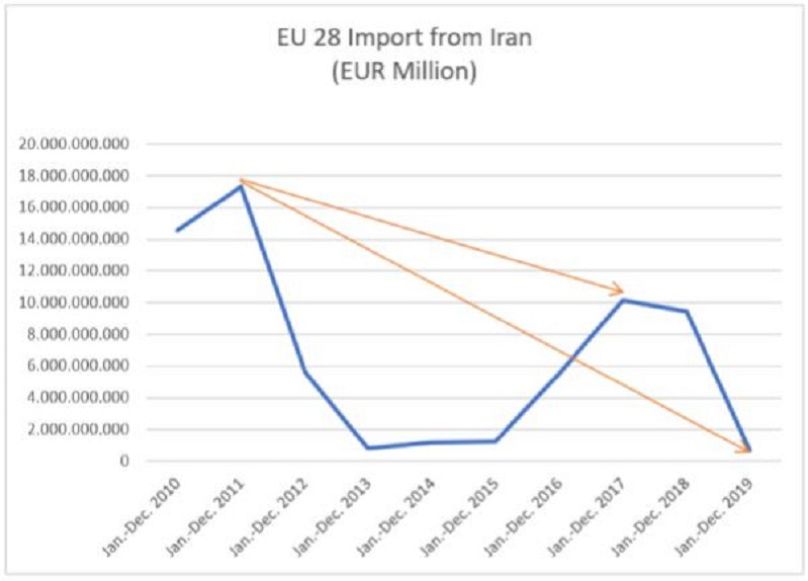 2012 marked a shift in EU’s approach to Iran in terms of sanctions, with Iranian oil and Central Bank being added to the list to which the EU restrictive measures now applied. From 2012 to 2015, Iran’s trade with the EU took a deep plunge from the record high of 2011 to the nadir of 2013-2015, and now to an all-time low of 2019. Although 2017 offered a glimpse of pre-sanctions status quo ante, it failed to keep up the good trend and the opening that was created due to the implementation of the JCPOA. The uncertainty created by the new US administration and their year-long campaign to exasperate Iran until it exited the agreement killed the constructive atmosphere in which the JCPOA could have been successfully implemented.

In a sense, up until 8 May 2019 – the date on which Iran announced its reversible phased plan to cease performing in part its nuclear commitments after a year of patience – the narrowly defined textual balance had been fully maintained, and technically verified, by the International Atomic Energy Agency (IAEA). On the wider plane, however, Iran was losing its economic benefits as the landscape did not offer any positive sign, as far as the promised normalisation of trade and economic relations were concerned. From a strictly JCPOA standpoint, it meant that the normalisation of trade and economic relations with Iran remained elusive, becoming a distant unattainable goal. The short period from Implementation Day on 16 January 2016 to 2018 indicated the huge economic gains for the EU as it managed to almost reach its pre-sanctions export to Iran. To the EU, the political, security and economic functions of the JCPOA were in perfect shape. 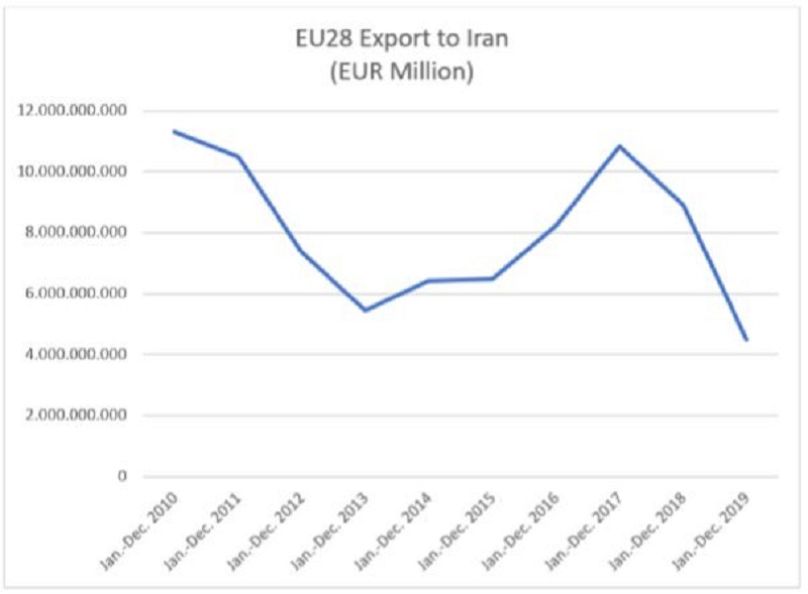 Economic benefits were what was perceived to accrue from the bilateral aspects of sanctions-lifting commitments under the JCPOA. Iran’s official statements to the effect, that it exercised strategic restraint for a full year (from 2018 to 2019), should be regarded in this light. It means Iran had made the fateful decision to stay compliant unilaterally, thereby keeping the textual balance of the deal, in spite of its diminishing economic value which saw 2019 become the worst period of Iran-EU trade. Any attainment of textual balance would hinge upon restoring the contextual balance; that is, any expectation from Iran to restore the May 2019 status quo ante goes hand in hand with increased benefits from the implementation of the JCPOA on political and economic planes.

Arguably, from an economic, political and security perspective, the EU was one of the major winners of the JCPOA.

Another important element integral to the successful implementation of the JCPOA is the more nuanced political benefits which are to accrue from the lifting of UN sanctions, i.e. the multilateral aspects of the deal. Under Security Council resolution 2231 (2015), a batch of UN arms embargoes on Iran will automatically expire on 18 October 2020. Although it falls way short of what the JCPOA promised, it nonetheless injects a semblance of balance into the deal.

Convoluted in a flawed logic, the fresh US onslaught on the JCPOA, if it materialises, may throw the deal irredeemably off-balance. Arguably, from an economic, political and security perspective, the EU was one of the major winners of the JCPOA. The nuclear deal is a major EU foreign policy achievement, and I am inclined to believe that the EU – the EU triumvirate in particular – is in a good place to maintain the existing frail balance on the multi and bilateral front by standing against the latest US offensive on the JCPOA, as well as restoring the balance on the economic front, thereby resuscitating the moribund nuclear agreement.