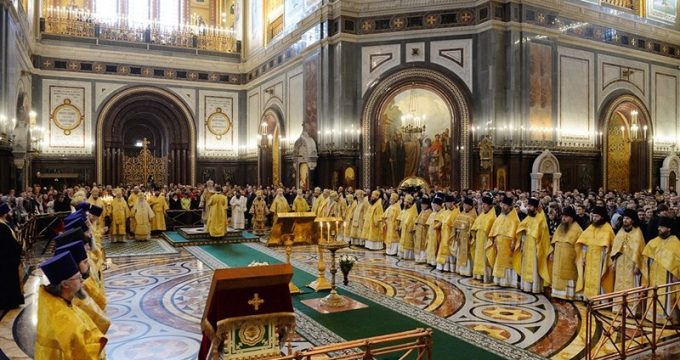 Tasnim – The Russian Orthodox Church welcomed the Iranian Supreme Council of Cultural Revolution’s proposal for closer interaction among religions in the collective efforts to contain the coronavirus pandemic.

The Russian Orthodox Church responded to a letter from secretary of Iran’s Supreme Council of Cultural Revolution who had called for the establishment of a joint committee of world religious leaders to figure out how to help people across the globe amid the outbreak of the novel coronavirus.

In its response, the Moscow Patriarchate has emphasized the importance of solidarity and cooperation among the religions in the current circumstances considering the common goal of the religious leaders, which is protecting the lives of human beings.

The Russian Orthodox Church has also called for constant dialogue between Islam and Orthodox Christianity, highlighting the role that dialogue among religions plays in the fulfillment of the common goals.

The Primate of the Russian Orthodox Church also wished the Iranian people success and prosperity, and prayed for the eradication of the novel coronavirus from the world.

On April 12, Secretary of Iran’s Supreme Council of Cultural Revolution Saeed Reza Ameli sent a letter to a number of major religious leaders and organizers of social campaigns in the world, stressing the need for a revision of the values relating to life and for the establishment of justice at various levels across the globe.

Ameli also denounced the man-made disasters in the shape of wars, sanctions and massacre of people, saying the outbreak of the novel coronavirus pandemic is reminiscent of the cruelties of the hegemony and capitalism which have resulted in hunger, social inequality and widespread tyranny against human societies.

The Iranian cleric proposed the idea of forming a joint committee of leaders of major religions and organizers of major social campaigns in order to find an appropriate solution to help the oppressed people of the world amid the critical situation caused by the outbreak of COVID-19 and pursue practical approaches to end hegemony across the world.