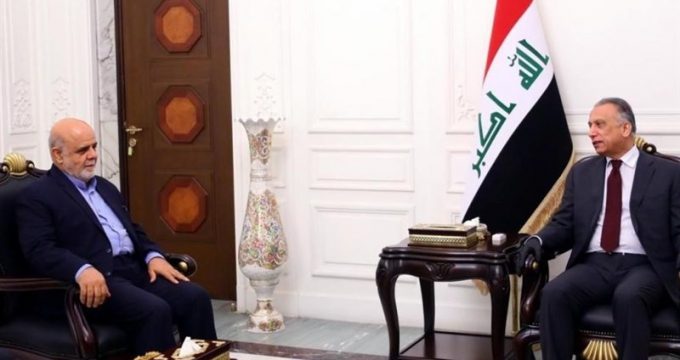 Tasnim – Iraq’s new Prime Minister Mustafa al-Kadhimi has reaffirmed his country’s commitment to working with Iran as a friend and brother and has lauded Tehran’s support for Baghdad in the war on terrorism, the Iranian ambassador said.

Iran’s Ambassador to Baghdad Iraj Masjedi held a meeting with the incoming prime minister of Iraq on Saturday.

The envoy said he has discussed a range of issues with Kadhimi, including the mutual cooperation between the two neighbors, commitment to the 1975 Algiers Agreement, banking interaction, the railroad connecting Iran’s Khorramshahr to Iraq’s Basra, and the visa arrangements.

The new Iraqi premier has pledged cooperation with Iran and has also praised the Islamic Republic for its efforts in the fight against the ISIL terrorist group, Masjedi said.

Meanwhile, Al Forat News has reported more details of the meeting between the Iraqi PM and the Iranian envoy, saying Kadhimi has highlighted Iraq’s willingness to establish perfect ties with Iran and all neighboring states to maintain regional security and stability.

Iraq is not a field for the acts of terrorism and aggression against any country or a place for payoffs, the Iraqi PM has said in the meeting.

The parliament approved 15 ministers out of a prospective 22-seat cabinet in a vote of confidence. Five candidates were rejected while voting on two ministers was postponed, leaving seven ministries still empty, including the key oil and foreign affairs positions.