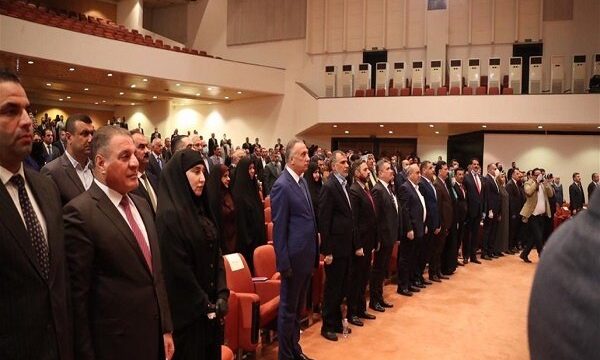 AP |  SAMYA KULLAB and QASSIM ABDUL-ZAHRA: Despite a boost from the U.S. hours after his inauguration early Thursday, Iraq’s new prime minister will have to walk a tightrope to appease both powerful Iran-backed political factions and allies in Washington.

Shortly after Iraqi lawmakers approved the government of Mustafa al-Kadhimi, the U.S. said it plans to grant Iraq a 120-day sanctions waiver enabling the country to import gas and electricity from Iran to meet its power needs — an indication of support for the new premier.

The exemption would be the longest period of time in months granted to Iraq to prove it is making progress in becoming less reliant on Iranian imports, a key condition for receiving the waiver.

Al-Kadhimi’s new program spells out measures welcomed by the U.S., including a vow to hold early elections, address Iraq’s severe health and economic woes amid falling oil prices, and bring arms under the control of the state. But Iraqi officials and experts said the new prime minister will have to maneuver between the competing interests of Iran-backed factions and allies in Washington, while managing financial shortfalls, the coronavirus crisis and rampant political dysfunction.

For now, al-Kadhimi has support from both Tehran and Washington.

Earlier this week, an Iranian political delegation arrived in Baghdad to inform Shiite political blocs of Tehran’s support for al-Kadhimi’s premiership, two senior Shiite political leaders said, speaking on condition of anonymity as they were not authorized to disclose the information.

Strategic talks between Washington and Baghdad are expected next month and will run the gamut of U.S.-Iraq relations, from military to economic support, according to Iraqi and U.S. officials. Key questions, including the nature of U.S. troop presence in Iraq, are expected to be discussed.

During these talks, al-Kadhimi will have the difficult task of pushing the Iraqi wish to reduce the controversy surrounding the American presence in Iraq without alienating Washington and losing financial support, said Toby Dodge, head of the London School for Economics’ Middle East Centre.

With deals being struck up until the last minute, lawmakers approved 15 appointees out of a Cabinet of 22, allowing al-Kadhimi to form a government under Iraqi constitutional guidelines. Other ministry portfolios will be subject to further negotiation with parliamentary political blocs.

That al-Kadhimi, who has no solid political base, had to change ministry portfolios to appease political blocs several times was a deliberate attempt to demonstrate power, said Dodge. Iraqi officials close to al-Kadhimi have said he plans to consolidate control within the prime minister’s office to push out reforms.

“In the run-up to become prime minister he was deliberately outflanked and humiliated by political blocs who showed him who has the power,” Dodge said. “What he desperately needs to do is appeal to rally public opinion above the widely discredited political elite.”

Passing a budget law for the year will be his first big test, officials and experts said. With it, Iraq can unlock much needed international loans to plug in a growing deficit amid falling oil prices. But austerity measures to balance the budget, such as cutting the country’s bloated public wage bill, will likely create both political and public discontent.

Shortly after he was officially named premier, al-Kadhimi spoke with U.S. Secretary of State Mike Pompeo, according to a statement from the U.S. State Department.

“In support of the new government the United States will move forward with a 120-day electricity waiver as a display of our desire to help provide the right conditions for success,” said spokesperson Morgan Ortagus, according to the statement.

Iraq needs Iranian gas and electricity to meet up to 30% of domestic power needs.

The U.S. Embassy in Baghdad said talks next month would “reaffirm” ties with Iraq.

“The new government must now turn to the hard work of implementing much needed reforms and addressing the needs of the Iraqi people. Our upcoming Strategic Dialogue with the government of Iraq aims to reaffirm the value of the U.S.-Iraqi partnership for both of our countries,” the embassy said in a statement.

The U.S.-led coalition has withdrawn from several Iraqi bases across the country in line with a planned drawdown conceived in December. Troops have consolidated in Baghdad and the sprawling Ain al-Asad base in Iraq’s western Anbar province.