First the Muslim ban, now coronavirus — Iranian families separated by one Trump order after another

The Intercept | Felipe De La Hoz: The Shamelis are an extraordinarily tight-knit Iranian family. Forty-year-old Amin, the eldest of five brothers, first arrived in California in 2003, and was followed slowly but surely by his parents and siblings. All of them, that is, except for Masoud, who for a decade now has been trying to join the rest of his family in the United States. The situation had been looking hopeful, until the global coronavirus pandemic and a couple strokes of the U.S. president’s pen blew it all up.

With new immigration restrictions just announced by Donald Trump in response to the spread of the coronavirus, the family now find themselves facing ever-mounting hurdles to their simple goal of being all together again.

“I don’t know what should I do. Because when you don’t know when you can go completely from one country to another country, you cannot plan for your life,” said Masoud from isolation in Iran, the site of one of the worst coronavirus outbreaks in the Middle East.

Masoud and his father are part of a lawsuit challenging Trump’s travel ban — famously enacted when he took office and amended until it was upheld by the Supreme Court in June 2018. It barred, to different extents, people from Iran, Libya, North Korea, Somalia, Syria, Yemen, Venezuela, and Chad from visiting or immigrating to the U.S. The suit challenges the waiver process, which in theory allows people to circumvent the ban but in practice is often incomprehensible and inconsistent. From an original group of 25, plaintiffs have melted away as their waivers have been belatedly granted while litigation drags on, leaving only three families, including the Shamelis.

“Every time somebody got it, we were hopeful that, OK, next round is our turn,” said Ehsan, the second oldest brother. Watching the dwindling group gave the family hope that Masoud could soon be next, even as the agony of waiting continued.

Those hopes took a hit as the health crisis shut down travel and the operations of U.S. consulates abroad. At the end of February, Trump signed a proclamation specifically barring people who had spent the prior 14 days in Iran from traveling to the United States, with a few exceptions that did not apply to Masoud.

Then, last week, Trump issued another proclamation, this time generally suspending immigrant visas for people outside the United States. The order is framed as a way to address the “risk to the labor U.S. labor market” that has resulted from the pandemic’s hit to the economy. Again, Masoud did not qualify for any of the exceptions the White House allowed.

These cascading legal obstacles mean that even if tomorrow Masoud is issued a waiver under the travel ban, or wins his legal case challenging it, the other two presidential orders will block him from receiving an immigrant visa or traveling to the United States. And that’s setting aside the difficulty of leaving Iran in the first place.

“They have the [original] travel ban. They have the actual borders closed between Turkey and Iran. They have the Covid-19 ban that came out last month. And now they have this one. So this is a fourth barrier,” said Curtis Morrison, an attorney representing the family in the federal case. 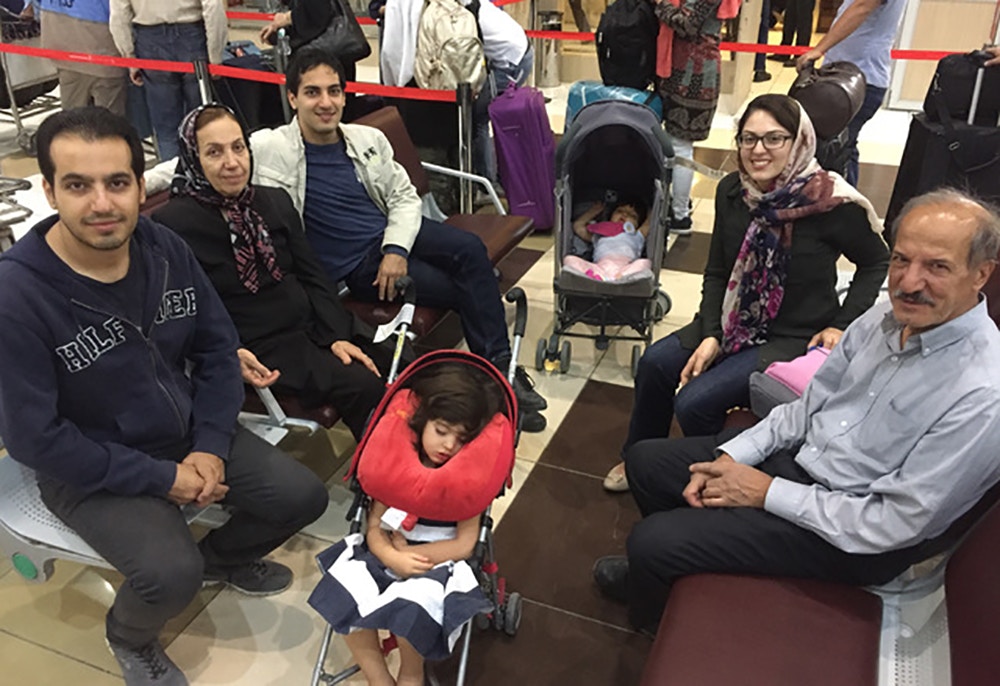 Masoud, left, with his family at the Esfahan airport before their flight back to the United States in August 2017. Photo: Courtesy of Shameli family

The family is about as good an example as you can find of the United States’ complex and multifaceted immigration system. Two of the brothers, Amin and Ashkan, went the employment immigration route, getting visas through their jobs; parents Reza and Zahra won the diversity visa lottery, bringing with them Ali, the youngest of the sons at 28; and Ehsan came through family reunification via his wife, whom he met while traveling on business to California. Masoud is being sponsored by his father for a family visa.

“In this lockdown, I’m completely at home alone. … If something happened, there is no one here to help me.”

The five brothers bear a strong resemblance to each other and to their father. All have technical degrees in science or engineering. The only difference between Masoud, a civil engineer, and the six members of his nuclear family who have made it to California appears to be bad timing. “If this proclamation was not in place, he would have been here for more than a year now,” said Ehsan, referring to the original travel ban.

The urgency to have Masoud join them stateside isn’t just sentimental in nature. The family lives in fear of an escalation of tensions between the U.S. and Iran. Reza specifically mentioned Trump’s recent remarks about firing on Iranian boats. Ehsan said his father had started taking antidepressants after a recent skirmish between U.S. and Iranian sailors. There’s also the ever-present specter of the pandemic. “In this lockdown, I’m completely at home alone. … If something happened, there is no one here to help me, you know?” said Masoud.

Trump’s latest order technically only lasts for 60 days, but it could be extended. Unlike prior travel bans that were framed around national security and public health, this one explicitly ties itself to labor, claiming to protect jobless Americans, which is probably a signifier that the White House’s immigration restrictionists — in particular, Trump adviser Stephen Miller — will try to make it permanent. Miller said in a call with conservative supporters this week that the order was a step in the process “to turn off the faucet of new immigrant labor.”

“Mission accomplished,” he said, adding that additional restrictions on temporary guest workers — excluded from this order after outcry from business groups — were still a priority. Indeed, the order includes a section titled “additional measures” that leaves the door open for expanded restrictions.

The latest proclamation doesn’t include any kind of waiver process. Asked if there were any provisions for applicants to override the ban, a State Department spokesperson reiterated the exemptions already set forth in the order.

Kia Nasseri, another plaintiff in the travel ban case, didn’t sleep last Monday night, when Trump tweeted that he’d be signing an executive order “to temporarily suspend immigration into the United States!” Nasseri is a U.S. citizen married to an Iranian woman whose daughter, now 19, fled her abusive father in Iran about three years ago. Nasseri has been trying to bring his stepdaughter to the U.S., but his efforts were thwarted by the travel ban. She has passed through Turkey, Armenia, Ecuador, and Georgia, running out tourist visas while waiting for a resolution.

She is now in Ankara, Turkey, where she overstayed her visa because the pandemic prevented her from leaving. To make matters worse, Nasseri’s wife went to visit her, and is now also stuck. At the moment, it’s Turkish, not American, travel restrictions leaving his wife stranded; permanent residents like her are exempt from Trump’s new order. So are children under 21 with U.S. citizen parents, like his stepdaughter, though she is still blocked by the original travel ban. Nasseri fears that Trump’s newest could be amended or expanded, putting even more obstacles in his family’s path.

“She’s not studying, she’s basically wasting her life,” said Nasseri of his daughter. He has had three surgeries that have decreased his lung function, and he has high blood pressure. “If I catch coronavirus, there’s a big possibility I’m going to pass. So I’m going to pass without seeing my daughter. And if they get it, I’m going to take the first plane there to take care of them, and I’m going to risk my life for them,” he said. “All I want is an answer, a yes or no answer. If it’s a no, that’s fine with me. I’ll just retire and cash out everything I have and move to another country and take my family with me.”