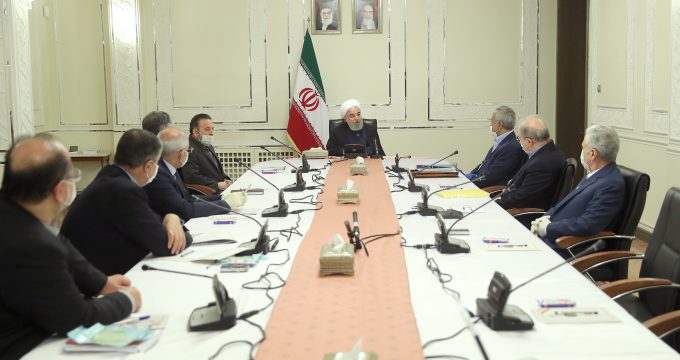 IRNA – President Hassan Rouhani said on Thursday that screening for COVID-19 should continue by the Ministry of Health, Treatment and Medical Education with diagnostic tests for suspected cases to ensure people’s health.

Speaking in a meeting with heads of experts committees in charge of fighting COVID-19, Rouhani said that providing foreign nationals living in Iran with medical treatment should continue.

He also called for training students through virtual methods.

Meanwhile, Iranian Minister of Health Saeed Namaki, presenting the white, yellow and red zones in Iran, said that the number of survivors is increasing and death tolls are on decline.

He added that the report indicates health ministry’s success in screening and diagnosis.namaki

In the meantime, minister of roads and urban development said trade interactions are underway in terminals with Azerbaijan and Turkey.

He noted that interaction through Sarakhs and Incheboron rail terminals will be resumed soon.

Moghaddam said that launching disinfecting tunnels has been used to disinfect train wagons, so that trade interactions with the Central Asian states will resume.

Head of Iranian Health Ministry’s Public Relations Office Kianoush Jahanpour said on Thursday that some 68 more Iranians died of coronavirus over the past 24 hours and 82,744 people out of a total of 103,135 infected with the coronavirus have survived and recovered while unfortunately, the total number of deaths reached 6,486.