The New York Times | Daniel Pipes: A conservative American commentator on Middle Eastern affairs gives six reasons to believe that taking over Palestinian territory would harm both U.S.-Israel relations and Israel’s status as the Jewish state.

Thanks to the Trump administration’s “Peace to Prosperity” plan, the topic of Israel annexing parts of the West Bank has moved from the fringe to the center of Israeli politics. The apparent noninvolvement of the United States State Department in the issue has prompted Prime Minister Benjamin Netanyahu to state his confidence that annexation will happen within “a few months,” or before the American presidential election in November.

I am not someone who frets over the Israeli “occupation” of the West Bank: in my view, the Palestinians long ago would have enjoyed self-rule had they stopped murdering Israelis. I ignore the Clinton Parameters, the former American president’s compromise formula to resolve the Palestinian-Israeli conflict two decades ago. Contrarily, I do encourage Israeli steps that signal the Palestinians that the conflict is over, and they lost.

Despite these views, I strongly oppose Israel annexing any of the West Bank, and I do so for six main reasons.

First, President Trump could well erupt in fury at Israel for unilaterally taking that step. While the Trump plan permits Israelis to annex about 30 percent of the West Bank, it does so, the State Department reminds them, “in the context of the Government of Israel agreeing to negotiate with the Palestinians.” Should Israelis charge ahead with the part they like and ignore the rest, they invite Mr. Trump’s monumental displeasure.

Second, annexation would alienate and weaken Israel’s diminishing number of friends in the Democratic Party and in Europe. Representative of this, the Democratic Majority for Israel did not mince words about annexation: “We cannot overstate the long-term damage such a move would have on the U.S.-Israel alliance. The repercussions would be extremely serious and long-lasting.” Senior advisers to Joe Biden conveyed the same message, as did a group of 30 Democratic Party foreign policy heavyweights, if less bluntly. Simultaneously alienating both Mr. Trump and the Democrats requires real skill. In addition, major European states condemned the prospect of annexation and hinted at reprisals. Ha’aretz quoted the French ambassador to the United Nations, Nicolas de la Rivière, as saying annexation “would not pass unchallenged and shall not be overlooked in our relationship with Israel” That could mean recognizing a State of Palestine.

Third, as the threat from Iran has grown in recent years, the Israeli government has successfully managed to expand ties with the Sunni Arab states, especially those bordering the Persian Gulf. This working relationship has been premised on the Arab governments de-emphasizing the Palestinian issue; nothing is more certain to make that issue come roaring back to life than the provocation of a unilateral Israeli annexation. Years of hard work, led by Mr. Netanyahu himself, could quickly blow up. 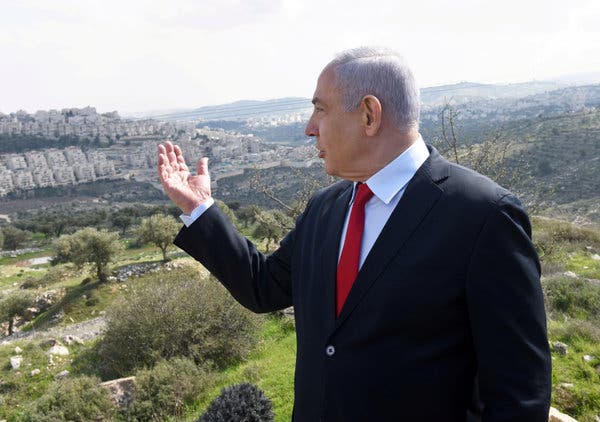 Prime Minister Benjamin Netanyahu delivering a statement while overlooking the Israeli settlement of Har Homa, in an area of the Israeli-occupied West Bank, in February.Credit…Pool photo by Debbie Hill

Fourth, annexation would most likely lead to Palestinian fury that could well destabilize Jordan, the West Bank and Gaza. Jordan’s Palestinian population has quieted down from the revolutionary fervor of old, but annexation could incite it again and gratuitously challenge the monarchy. Residents of the West Bank could start a new intifada — uprising — costing Israeli lives and harming its international standing. Emboldened, Gaza’s Hamas rulers might start a new round of war.

Fifth, annexation is sure to alienate Israel’s Left, which would lead at a minimum to a vicious political battle and probably to a contingent of Israeli Zionists turning anti-Zionist, with some Israelis leaving the country in disgust.

Sixth, annexation would be likely to make more Palestinians eligible to become citizens of Israel. That would be a profound mistake, since its Arab citizens constitute what I believe is the ultimate enemy of Israel’s status as a Jewish state, the one that will still be standing after the threats posed by Iran and Gaza have been dealt with. Citizens of Israel, unlike external enemies, cannot be defeated. Their allegiance must be won over, and the larger their number, the harder that becomes.

In short, annexation of the West Bank would probably damage Israel’s relations with the Trump administration, the Democrats, Europeans and Arab leaders, as well as destabilize the region, radicalize the Israeli Left, and harm the Zionist goal of a Jewish state.

And what does annexation actually achieve? It is a symbolic move, a gesture toward Israelis living on the West Bank in legal limbo. But annexation does not extricate them from that limbo, since it is likely that no important government in the world would recognize their change in legal status.

Israel must assert itself against the Palestinians; but that assertion must be strategic, fitting into the larger campaign to compel Palestinians to give up their goal of eliminating the Jewish state. Annexing the West Bank is a self-indulgence that has the opposite result. Therefore, despite its intention, it buoys the Palestinian cause and renders a resolution of the conflict more distant.

Accordingly, friends of Israel must loudly and clearly say “No” to West Bank annexation.