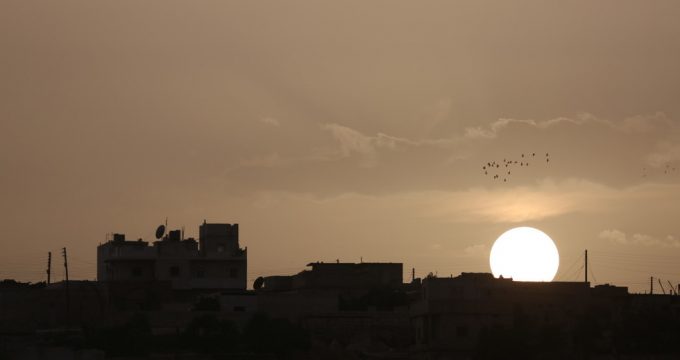 RT – The Syrian air defense shield was activated to intercept missiles targeting the area south-east of Aleppo, SANA news agency said. The missiles were reportedly launched by a “hostile” aircraft.

The incursion took place at around 10:32pm local time Monday. A military source, cited by SANA, reported that the country’s air defenses spotted an enemy aircraft approaching the nation’s second-largest city from the north-east of Athria, a town near Hama, to the west of as-Safira area in the Aleppo countryside.

Several military depots in as-Safira came under fire as result of the attack, with air defenses scrambling to shoot down the incoming projectiles.

It is unclear if the facilities suffered any damage as result of the strike, with SANA reporting that the evaluation of the impact is still ongoing. There have also been reports that a research center located in the same area has been targeted in the apparent missile strike.

#UPDATE: Airstrikes blamed on Israel are reported to have targeted the research centre/defence manufacturing facility near Al-Safirah, southeast of Aleppo. pic.twitter.com/0760PWTKEN

Although no party has claimed responsibility for the raid, it fits into the pattern of bombings Israel routinely carries out against what it claims to be “Iranian positions” inside the Syrian territory.

Tel Aviv does not typically comment on individual operations, but has recently signaled it would step up its raids in Syria which Damascus considers an encroachment on its territorial integrity.

“We have moved from blocking Iran’s entrenchment in Syria to forcing it out of there, and we will not stop… We will continue to take the fight to the enemy’s territory,” Israeli Defense Minister Naftali Bennett said Tuesday, as he appeared to acknowledge the Israel’s involvement in the recent spate of attacks.

Monday’s assault has become the sixth such strike believed to have been carried out by Tel Aviv within the last two weeks, the Times of Israel reported.

In an early morning raid on Friday, Israeli helicopters pummeled a number of military positions in the Quneitra and Daraa provinces in the south of Syria. The strikes were reported to have inflicted “limited material damage,” according to SANA.

That came after up to three civilians were killed and several more wounded in yet another Israeli attack last Monday, which was reportedly launched from Lebanese airspace.