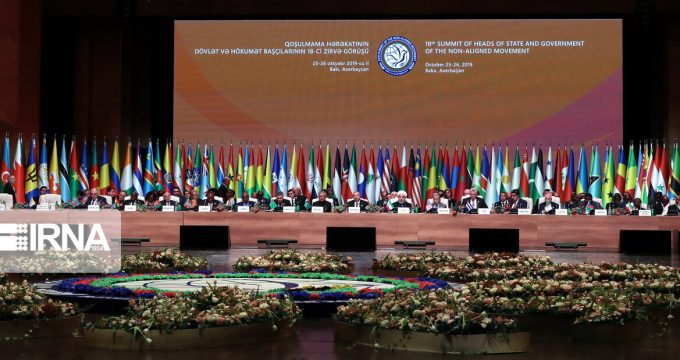 MNA – Foreign Ministry Spokesman Seyyed Abbas Mousavi said on Mon. that President Rouhani will participate in the Non-Aligned Movement (NAM) Summit today, hosted by the Republic of Azerbaijan, via videoconferencing.

Speaking in his weekly press briefing in front of media companions after about two-month hiatus due to the outbreak of coronavirus, he added, “Iranian diplomacy is going on and we have witnessed that senior political officials of the country including the president, foreign minister and other deputies both inside and outside the country continued diplomatic affairs significantly.”

A number of 46 senior authorities of countries and heads of international organizations will participate in this Summit, he said, adding, “battling against coronavirus will be the main topic of discussion in this summit as well as the cooperation of participant countries in the fight against COVID-19.”

Iranian Foreign Minister Mohammad Javad Zarif has held about 22 telephone conversations with his counterparts in different countries during the outbreak of COVID-19 and discussed the regional and international issues, Mousavi stressed.

He pointed to the anniversary of the US pullout from the 2015 nuclear deal, known as Joint Comprehensive Plan of Action (JCPOA) on May 7, 2018 and said, “the United States breached its promise within the framework of JCPOA and violated UNSC Res. 2231. With violating its commitments, the United States is no longer a participant to JCPOA.”

The United States has a dark history in lack of complying with international commitments and JCPOA is one of the approaches of US unilateralism, Foreign Ministry Spokesman Mousavi reiterated.