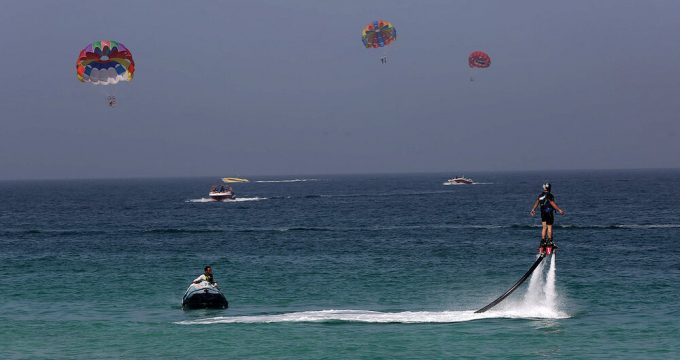 How to maintain peace in Persian Gulf region

Iranian Diplomacy | Javad Heirannia: The presence of foreign forces in the Persian Gulf has caused regional security efforts to secure the interests of these powers.

The security policy of countries stems from how their ruling elites understand the concepts of “threats” and “security issues” and “how to deal with threats”.

The security policy in the Persian Gulf has not gone its natural course throughout history and due to the presence of foreign countries in the region, the balance of natural forces has not been formed.

Former CIA agent Graham E, Fuller has confirmed this in his book  “The Center of the Universe.”

This has made regional struggles to be based on the interests of foreign countries. Suppose, for example, that Iran and Saudi Arabia decide to normalize relations tomorrow, will regional powers allow Riyadh to do so? On the other hand, does Saudi Arabia’s understanding of Iran as a threat merely serve Riyadh’s interests or Washington’s?

This example illustrates how the presence of foreign powers in the region is effective and fundamental in how the regional actors perceive the concept of threat and the ways to deal with it.

To understand this issue better, we take a look at the common categories in security theories that fall into two sections.

In the realist approach, in addition to the narrow definition of security in the subject area, we see a limited interpretation of the purpose of the security reference. According to this view, “government” is the only source of security. Under the realistic approach, the three approaches of “collective defense” manifested in NATO, “collective security” manifested in the United Nations, “Concert Security” manifested in the nineteenth-century European concert can be identified.

The model pursued by the Arab Gulf states is based on a realistic approach to security, which is a narrow interpretation of it.

In this model, the Arab states of the Persian Gulf are focused on “external balancing” and mainly have security agreements with countries such as the United States, France, Britain, and Turkey, and have recognized NATO’s presence on the basis of the “Istanbul Cooperation Initiative”.

Needless to say, the plan relies on foreign powers on the one hand and military and government-centered understanding of security on the other. That is, while arms purchases provide advanced military equipment to these countries, they misunderstand the concept of real security that should protect people.

In other words, when the military expenditures of these countries are compared with the level of their economic and political development, we see a kind of imbalance. This issue is noted in the United Nations Human Development Report on Arab countries.

Based on this, it can be seen that regional security campaigns, do not protect people and just provide artificial stability by providing security for the ruling elites.

Meanwhile, Iran has presented various security plans. The “Regional Dialogue Forum” and the “Non-Aggression Pact” are among the security plans for the Persian Gulf region, which have been elaborated in detail by the government of Hassan Rouhani and the Iranian Foreign Minister Dr. Zarif.

Following these plans, Iran presented the “Hormuz Peace Endeavour (HOPE)” to the United Nations, which has theoretically distanced itself from the idealism of past plans and has moved towards a kind of realism based on regional relations.

Iran has repeatedly stated that regional security should only be provided by regional countries and that extra-regional powers should leave the region, however, The Islamic Republic defines a mechanism for this issue based on the “Hurmoz Peace Endeavour (HOPE).”

It should be noted that security plans should take into account the realities and concerns of all countries, and there should be a serious effort to make them operational.

Therefore, relying on projects that do not include the interests of all the regional countries is purely useless and will increase mistrust.

Although the Hormuz Peace Endeavour (HOPE) is based on regional reality, it has not yet been accepted by key actors in the region, including Saudi Arabia and the Gulf Cooperation Council.

In contrast, countries such as Saudi Arabia, Bahrain, and the United Arab Emirates have increased insecurity in the region by participating in the US-European coalition. This complexity further serves the interests of extra-regional powers, and the countries of the region will not benefit from it in the long run.

Accordingly, Iran has always stated that foreign countries should leave the region, and the President of the Islamic Republic of Iran announced on Wednesday that “the United States should know this Gulf is called the Persian Gulf and not the Gulf of New York or Washington.”

How the regional countries can withdraw from military and security agreements with foreign powers when they mistrust each other? The answer is that they should create an atmosphere of mutual trust in the region and do not consider one other as a threat.

But what is the mechanism for this?

The Helsinki Accord was the beginning of a process in which NATO members and Warsaw, along with neutral European countries, could sit together without preconditions and discuss their security concerns.

The Commission on Security and Cooperation in Europe is based on principles such as respect for sovereignty, avoiding the use of force, respect for borders and territorial integrity, peaceful settlement of disputes and avoiding interference in the internal affairs of other countries. It allowed members to sit around a table and discuss security concerns and find the necessary solutions.

If we want to adopt the CSCE model, we need to hold a number of meetings in which all the parties can discuss their security issues as well as their solutions.

Finally, some measures must be taken in order to build trust between the members such as holding meetings or establishing organizations to find solutions for the regional disputes. Ultimately, when mutual trust is built, a mechanism can be used to sign arms control agreements. This will fundamentally help the security and stability of the region.

The result of this action can be a temporary process or a permanent organization that has specific agendas and there is frequent contact between the members.

Members of this security framework must first ensure that issues are not resolved through war and that they must not interfere in each other’s internal affairs. The security framework should be based on the “Security Complex” model proposed by Barry Buzan, which focuses solely on the security of the Persian Gulf and members will not apply it for other security issues.

Following this mechanism could, in the long run, put an end to the presence of foreign countries in the regional security and defeat projects such as Iranophobia that aims at plundering the region’s resources. Mutual perception of threats and a common approach to how to deal with them is one of the main prerequisites for this mechanism.