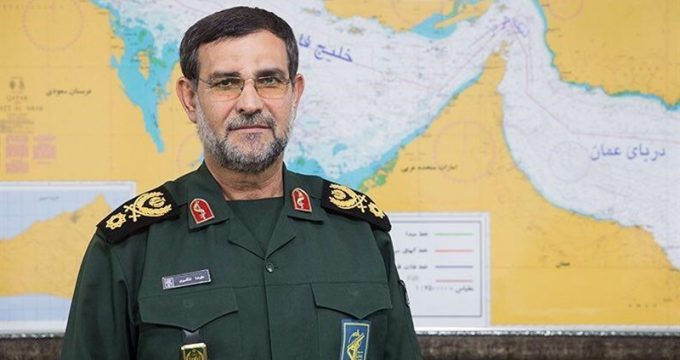 Tasnim – Commander of the Islamic Revolution Guards Corps Navy Rear Admiral Ali Reza Tangsiri said regional security should be ensured by regional countries, which he said can force aliens out of the region through cooperation.

In remarks on Wednesday, made on the occasion of the Persian Gulf National Day, the IRGC Navy commander underlined that the Islamic Republic does not cast covetous eyes on any country.

“We believe that regional countries can extend the hand of friendship to each other, and can ensure regional security and evict outsiders from the region through strong convergence.”

“This region has always been the Persian Gulf and will remain so forever,” the commander said.

Tangsiri also highlighted Leader of the Islamic Revolution Ayatollah Seyed Ali Khamenei’s zeal for the Persian Gulf, saying the Leader always stresses the need to use the original name of the Persian Gulf islands.

“For instance, the Bani Faroor islands must be called ‘Farooran’ or ‘Faroorgan’, or Abu Musa should be called Bu Musa,” the commander said.

Persian Gulf has been used throughout history, in maps, documents and diplomacy, from the ancient Persians, whose empire dominated the region, to the Greeks and the British.

The United Nations uses Persian Gulf. A 2006 paper by a United Nations working group found unanimity in historical documents on the term, which it said was coined by the Persian king Darius the Great in the fifth century BC.