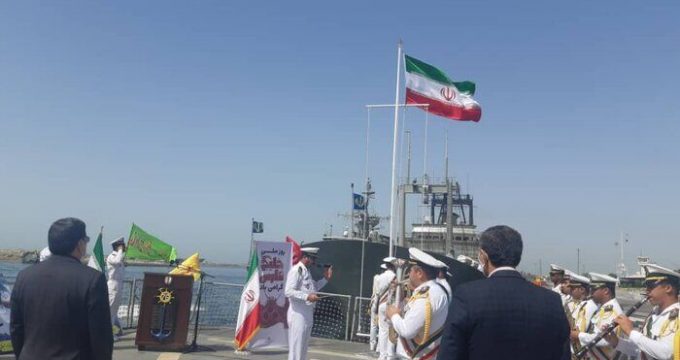 IRNA – Iranian Flag hoisted over the domestically-developed Jamaran Destroyer on the National Day of Persian Gulf on Ordibehesht 10 (April 29).

The ceremony was held in the Persian Gulf in the presence of the governor and military commanders of Hormuzgan Province on Wednesday.

The occasion commemorates the exit of colonial and foreign forces from the strategic waterway.

Tenth of Iranian month of Ordibehesht falling on (April 29 or 30) marks the anniversary of Shah Abbas I of Persia’s successful military campaign when the Portuguese navy was forced out of the Strait of Hormuz, which had been occupied by the colonialist Portugal in 1522.

The Portuguese made a fortress in Hormuz Island and had full control of the trade between India and Europe passing through the Persian Gulf for more than 100 years.

The waterway is the gateway of the commercial and cultural relations with the entire world, said Fereydoon Hemmati, the governor of Hormuzgan Province.