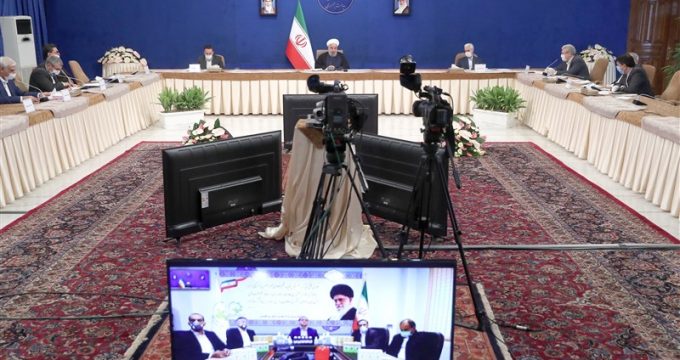 MNA – Iranian President Hassan Rouhani, in his Wednesday remarks in cabinet meeting, addressed the US saying that “this gulf’s name is the Persian Gulf not the gulf of New York or Washington gulf.”

“The US must spot applying its conspiracy plots against the Iranian nation who has its name on this gulf and has protected it in history,” Rouhani said.

“The Iranian nation and soldiers beside the IRGC, Armed and Basiji forces will continue protecting the Persian Gulf,” he underlined.

Elsewhere, in his remarks, he addressed Iran’s capability in coping with the coronavirus.

In a message on Wednesday to the Leader of the Islamic Revolution Ayatollah Seyed Ali Khamenei, the Iranian President expressed gratitude for the Leader’s agreement with the government’s proposal to release and organize Justice Shares, which is a big step towards realizing the presence and participation of the people in the country’s economy and construction, has provided the ground for the further flourishing of the capital market, which will benefit people from the country’s major economic units.

“I would like to offer my sincerest appreciation to Your Excellency on behalf of all shareholders who make up the hard-working classes of society, and the servants of the people in the government who worked to achieve this, Rouhani said in his message to the Leader.

“Since the year 1393, the Government of Prudence and Hope has made the protection of people’s property rights in Justice Shares a priority in its economic program, and by completing the shareholders’ database, launching an electronic system for this regard, and transferring shares of large and profitable national companies to the Justice Share portfolio, providing the possibility of paying dividends to the shareholders since the year 1395, and in 1396 until now, it has submitted the bill to the Islamic Consultative Assembly and serious follow-ups, following the plan of organizing and releasing Justice Shares and now is fully prepared for the realization of the people’s right to own and manage their shares with your favor.”

“We hope that this new opening in the country’s capital market and the people’s enjoyment of their sweet capital will bring the sweetness of growth and justice to our people and help the country’s economic progress, despite all the pressure of sanctions.”