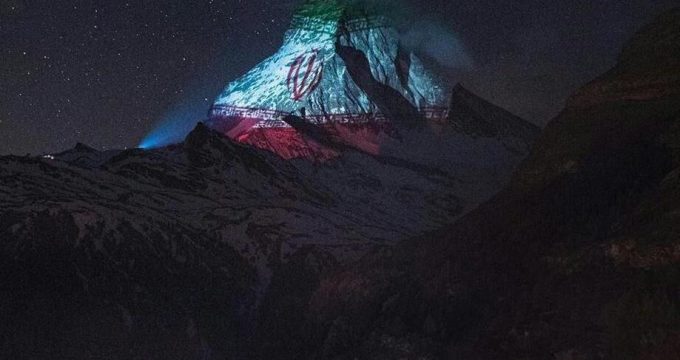 IRNA – Switzerland projected Iranian flag on Matterhorn Mountain to convey the message of hope to Iranians amid coronavirus pandemic.

“Last night, on the most iconic mountain in #Switzerland, the Matterhorn, the Iranian flag was projected to send a message of hope, strength and perseverance to the Iranian people in the midst of COVID-19 crisis,” Swiss embassy in Tehran wrote in its official Twitter account.

He further noted that both Swiss Embassy and government have close cooperation with IRCS, as it is considered a main partner which playing an effective role in fighting the deadly virus.

Swiss companies operating in Iran are eager to cooperate with IRCS, he said, noting that Iran can place its orders with them in the field of medical supplies.

The head of Iran’s Health Ministry’s Public Relations Office Kianoush Jahanpour said on Sunday that coronavirus killed 60 more people in the past 24 hours reaching the number of the death toll to 5,710 people.

Iran has taken numerous steps to stop the spread of the disease, ranging from closing schools and universities to cancellation of cultural and religious gatherings. The Iranian government is also constantly disinfecting and sanitizing public places.