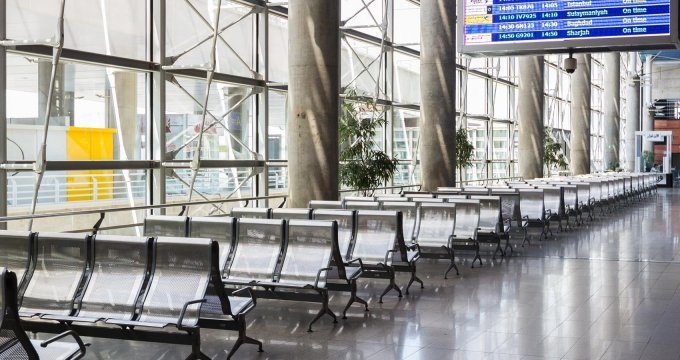 Financial Tribune – Following the outbreak of coronavirus, the number of flights and passengers at Tehran’s Imam Khomeini International Airport during the month ending March 19 declined by 70% and 77% respectively, leading to a 60% decrease in revenues compared with the same period of the year before, says Managing Director of Imam Khomeini Airport City Mohammad Mehdi Karbalaei.

“IKIA saw a 91% drop in the number of flights and a 97% decrease in the number of passengers, resulting in an 88% decline in revenues year-on-year,” he was quoted as saying by Mehr News Agency.

“The company has 5,000 employees on its payroll, of whom 3,000 are offering airport services across the whole area of Imam Khomeini Airport City.”

Karbalaei noted that the past two months’ rents were forgiven for the company’s commercial tenants, although 3,000 people are at risk of losing their jobs if the current trend persists.

IAC registered a total of 349,953 takeoffs and landings during the period under review, which indicates a 3% decline compared with the similar period of last year.

More than 43.16 million passengers were transported, indicating a 1% decrease year-on-year.

Over 431,213 tons of cargos were handled during the same period, which also shows a 1% decrease year-on-year.

A total of 291,209 takeoffs and landings were registered by domestic flights during the 11 months, down 2% YOY. More than 34.21 million passengers and 235,004 tons of cargo were transported domestically, both indicating a 1% rise YOY.

On the international front, 58,744 takeoffs and landings were registered, down by 8% YOY. A total of 8.95 million passengers and more than 178,209 tons of cargo were transported to and from overseas destinations, down 5% and 3% respectively year-on-year.

More than 3.53 million passengers and 31,018 tons of cargos were transported during the month, indicating a 5% and 15% decrease respectively YOY.

The report shows 25,387 takeoffs and landings were registered by domestic flights from Jan. 21 to Feb. 19, unchanged YOY. Close to 2.97 million passengers and 21,884 tons of cargo were transported domestically, indicating a 3% and 6% decrease respectively YOY.

On the international front, 4,042 takeoffs and landings were registered, showing a 10% decrease YOY. A total of 553,675 passengers and more than 9,134 tons of cargo were transported to and from overseas destinations, indicating a 17% and 31% decrease respectively YOY.

The dramatic decline in airport traffic as a result of the coronavirus spread and the ensuing flight restrictions will be further elaborated in IAC’s upcoming reports.

The spread of new coronavirus in Iran has dealt a heavy blow to airlines and travel agencies.

Demand for air transport has considerably decreased following the spread of the coronavirus disease, known as COVID-19, leading to airlines and travel agencies suffering huge losses. This is while they had prepared themselves for the usual end of the year boom in the runup to Norouz, the Iranian New Year holiday season starting March 20.

Secretary of the Association of Iranian Airlines Maqsoud Asadi-Samani said earlier this month that Iranian airlines are estimated to have sustained 30,000 billion rials ($185 million) in losses by April 3, as coronavirus has halted flights within the country and abroad, adding that three airlines grounded their entire fleet.

The number of air passengers reduced by 76% and flights by 90% during the Iranian New Year holidays, he added.

“IAC revenues have declined by 80% following domestic and international flights shutdown,” Hamidreza Seyyedi, an official with the company, said.

By the end of May 2020, most airlines in the world will be bankrupt, says CAPA—a trusted source of market intelligence for the aviation and travel industry. A coordinated government and industry action is needed now, if catastrophe is to be avoided.

As the impact of the coronavirus and government travel reactions sweep through our world, many airlines have probably already been driven into technical bankruptcy, or are at least substantially in breach of debt covenants.

Cash reserves are running down quickly as fleets are grounded and what flights there are operate much less than half full.

Global airlines stand to lose $113 billion in sales, if the coronavirus continues to spread, according to the International Air Transport Association.

In the early days of the outbreak, regional countries, including Iraq, Turkey, the UAE, Kuwait and Azerbaijan announced they would suspend flights to Iran and would not allow entry to Iranian airlines.