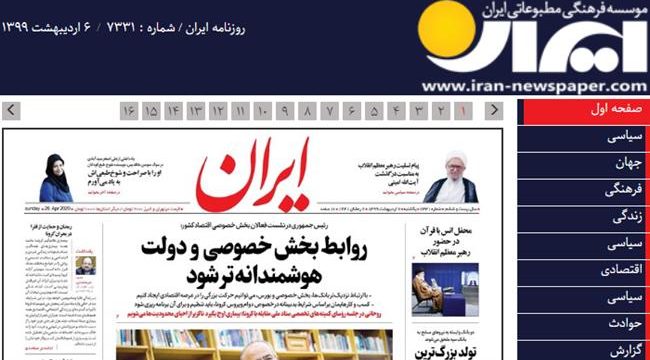 Mahdi Shafiei made the comments on Saturday, adding that legal efforts are underway to unblock and take back the domain “iran-newspaper.com”.

In the meantime, he said, the newspaper’s online version will be available via “irannewspaper.ir”.

The newspaper’s .com domain is currently seized by the US Treasury Department, and its Florida-based “OFAC Holding” is now introduced as the registrant of the “iran-newspaper.com”.

The US government says “it has the right to seize any .com, .net and .org domain name because the companies that have the contracts to administer them are based on United States soil,” a US Homeland Security official said in 2012.

In January 2020, the website of Iran’s Fars News Agency was also blocked upon the US Treasury’s order.

The news agency said that it had received an email from the server company, which explicitly said that the blockage is due to an order by the OFAC and its inclusion in the list of Specially Designated Nationals (SDN).

In December 2019, Google blocked access to Press TV and Hispan TV’s official YouTube accounts without any prior notice.

After President Donald Trump took office in 2017, Washington ramped up its efforts to target the Islamic Republic.

The campaign even assumed the self-styled title of “maximum pressure” under the current US president. The drive has seen the US leaving a multi-party nuclear agreement with Iran in May 2018, and returning the nuclear-related sanctions that the deal had lifted.

As part of the campaign, the US State Department has called on social media companies to block the accounts of Iranian government leaders, and iOS — a mobile operating system created by US company Apple Inc. — disabling Iranian applications.

The Islamic Republic of Iran Broadcasting (IRIB) has been targeted by the US sanctions since 2013. The US Treasury sanctioned IRIB Head Abdolali Ali-Asgari in May 2018.