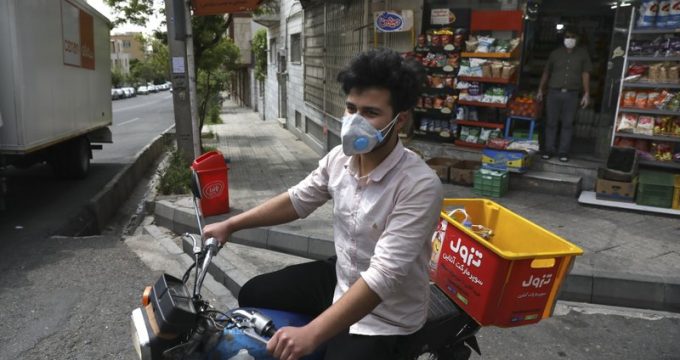 Iran, like wider Mideast, relies on deliveries amid pandemic

AP | AMIR VAHDAT: For some $15 a day, deliverymen don masks and gloves in Iran’s capital to zip across its pandemic-subdued streets to drop off groceries and food for those sheltering at home from the virus.

Like the wider Mideast, from skyscraper-studded Dubai to the narrow alleyways of Cairo, Iranians in cities rely on delivery for many of their daily supplies amid one of the world’s worst coronavirus outbreaks.

Those deliveries, coming as Muslims prepare for the holy fasting month of Ramadan, take on new importance for those receiving the goods and offer new risks for the couriers trying to make a living.

“I need a source of income and I take all the risks,” 23-year-old deliveryman Yaghoub Moradi said.

Iran, the Middle Eastern country hardest hit by the pandemic, on Thursday put its death toll from the virus at 5,481 out of more than 87,000 confirmed cases. State TV said there were 1,030 new cases and the death toll was 90 more than Wednesday.

Iran already struggles under severe U.S. sanctions blocking the sale of its crude oil abroad, measures imposed after President Donald Trump unilaterally withdrew America from Tehran’s nuclear deal with world powers in 2018. That has led to a monthslong period of increased tensions that have persisted through the pandemic.

Now, the virus is striking the service sector and other industries that escaped the wrath of sanctions, economic analyst Mehdiyar Mostafaei told The Associated Press. For a nation already struggling with unemployment, that’s forced many into the gray market of gypsy cabs and on-demand delivery, using their own vehicles.

Shahin Daryani, a supermarket owner, told the AP that much of his sales come from phone orders. The demand has seen him hire four new couriers.

“My customers and I prefer to not see each other in the supermarket,” Daryani said. “If they stay at home, it could be great, even for me. No contact, no virus outbreak.”

Iran on Monday reopened intercity highways and major shopping centers to stimulate its sanctions-choked economy, gambling that it has brought under control its coronavirus outbreak, even as some fear it could lead to a second wave of infections. That fear has led those who can stay inside to rely on deliveries.

With so many staying home, the internet taxi service Snapp, the Iranian app that resembles Uber, has seen a drop off in demand.

“Before the Nowruz (the Persian New Year), some 800,000 were active in (using) Snapp, but the virus cut 70 percent of them,” Snapp’s managing director, Jhubin Alaghband told the AP.

The pandemic, however, has seen a spike in demand for SnappFood, which organizes grocery store deliveries. Its orders have doubled to some 20,000 a day, Alaghband said.

But the risk remains for couriers like Saeed Vatanparast. He said he worried while on his deliveries about contracting the virus by handling customers’ money or using his portable debit card machine to take payments.

“God knows if they have the virus I can contract it and I can take the virus with me to other homes and customers.” he said.

Most people who become infected experience mild to moderate symptoms. But the virus can cause severe illness and lead to death, particularly among older people and those with underlying health problems. It is highly contagious.

Egypt’s highest religious authority, Grand Mufti Shawki Allam, said Thursday that healthy Muslims have a religious obligation to fast during the holy month of Ramadan despite the global pandemic.

“After consulting with medical experts in the midst of the current pandemic, we affirm that fasting has no negative effect on (healthy) people,” said Allam in a video posted on Facebook.

Allam said the elderly and those with underlying medical conditions should follow their doctors’ advice on whether they could fast.

“As to coronavirus patients, they are the most eligible to break their fast,” he said.

Egypt’s government has so far confirmed more than 3,890 cases of the novel coronavirus, including 287 fatalities. The government has banned gatherings, including congregational prayers at mosques. The Cabinet announced on Thursday that the nightly curfew will begin at 9 p.m. instead of 8 p.m. as of Friday, the first day of the holy month of Ramadan, when Muslims fast from dawn to dusk.

Also, shopping malls in Egypt, which were allowed only to work on weekdays until 5 p.m., will be reopened on weekends too. The scaled back curfew hours will likely not allow people to hold large gatherings for iftar, the meal with which the faithful break the daytime fasting, except within the privacy of their homes.

The United Arab Emirates announced a gradual lifting of its lockdowns over the virus on Thursday night. Dubai said its Metro system would resume operations on Sunday. In Dubai, a 24-hour lockdown would be eased from Friday, the government said, though a nighttime curfew will still be in effect.

In Lebanon, four more refugees living in a Palestinian camp in the country’s east tested positive on Thursday for the virus after their relative, a woman, had tested positive the day before, said health official Firass Abiad. The announcement about the Palestinian woman triggered a spate of testing in the camp. The authorities in Lebanon, a tiny country of 5 million people, have reported 22 deaths from among 688 cases of coronavirus.