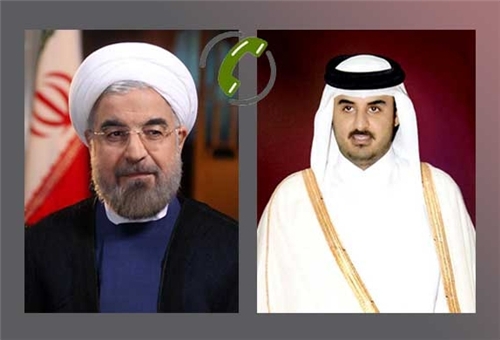 Iran’s President: Saudis have to shift gear sooner or later

Tasnim – Iranian President Hassan Rouhani deplored the unrelenting Saudi-led military campaign against Yemen, saying the kingdom will recognize sooner or later that it must reverse its policies.

In a telephone conversation with Emir of Qatar Sheikh Tamim bin Hamad al-Thani on Tuesday, Rouhani lauded the friendly and brotherly ties between Tehran and Doha, saying, “As a friend and neighbor, Qatar has always had significance for Iran in the bilateral, regional and international relations.”

The Iranian president also stressed the need for collective action and joint cooperation among all countries in the battle with the novel coronavirus.

Highlighting Iran’s careful planning and its measures to contain the spread of the coronavirus, treat the patients and implement policies on the economic, administrative and educational activities amid the outbreak, Rouhani said the Islamic Republic is prepared to share its experiences in handling the coronavirus with all countries, particularly with the friendly and brotherly nation of Qatar.

He further called for efforts to proceed with the economic and trade interaction between Iran and Qatar in conformity with the health protocols, urging that the officials of the two countries should make efforts in the economic cooperation joint commission to that end.

The president then denounced the US sanctions on Iran, stating, “Not only are the US’ pressures and cruel sanctions against Iran a violation of the international regulations, but they (Americans) are also trampling on humanitarian principles by exacerbating their behavior under such difficult conditions, including by preventing the International Monetary Fund from giving Iran a loan.”

“We believe that in such special situation, all countries in the world should stand with each other in the battle with the coronavirus and should explicitly express their stances on the US’ hostile measures,” Rouhani said, IFP reported.

He also strongly deplored the continuation of the Saudi-led military coalition’s devastating attacks on Yemen, adding, “Sadly, they are not still ready to end their inhumane measures, but we have no doubt that they will realize sooner or later that they have to change their path.”

“We believe that the only way to ensure sustainable security and stability in the region is cooperation and friendship among the regional countries,” he underlined.

For his part, the Emir of Qatar wished the Iranian government and nation and all Muslims in the world health, and stressed the need for joint action and cooperation to contain the spread of coronavirus.

Sheikh Tamim bin Hamad al-Thani also called for efforts by the Iranian and Qatari officials to enhance the relation and economic cooperation between the two Muslim countries.

He also slammed the US’ cruel sanctions against Iran, noting, “Today, the world is in special conditions, and we believe that under such circumstances, the US must lift the sanctions and the whole countries should also move towards the new situation.”

Deploring the continued problems in the region, the Qatari Emir expressed hope for ceasefire in Syria and Yemen and for the settlement of the regional problems through collective cooperation.