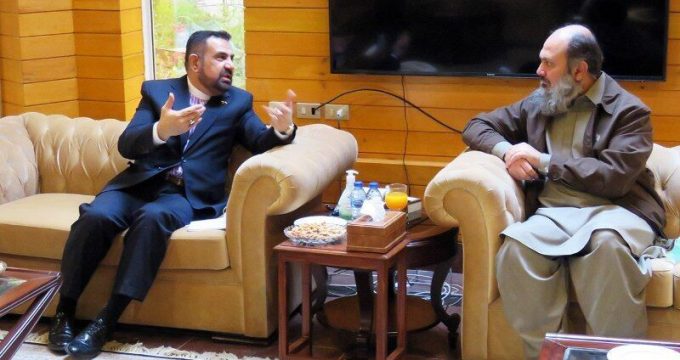 IRNA — The Consul-General of the Islamic Republic of Iran in Pakistan’s southwestern city of Quetta while expressing his country’s readiness to enhance cooperation with Pakistan in all areas, especially the border trade, said that cooperation between the two countries would be further strengthened in post-COVID19 era.

Mohammad Rafiei said this during a meeting with Chief Minister of Balochistan province Jam Kamal Khan.

During the meeting, both sides discussed promotion of Pakistan-Iran relations and cooperation between the two brotherly Islamic countries, especially between neighboring provinces of Sistan and Baluchestan and Balochistan.

During the meeting, which coincided with the end of the four-year tenure of the Iranian Consul-General in Quetta, the two sides discussed a wide range of cooperation, border exchanges, developments related to the coronavirus, border trade and economic relations between the two provinces and some of the problems being faced by the business community of the two countries after the closure of the common border.

Consul-General apprised the Chief Minister of Balochistan about his performance in Quetta during the last 4 years. Consul-General emphasized the need for promotion of border trade and said that border trade would bring economic prosperity in the region.

He appreciated the efforts of the Chief Minister of Balochistan to control coronavirus in the province.

He also praised the Balochistan government’s efforts to develop effective programs to facilitate the movement of Pakistani pilgrims across the border and to screen them for the coronavirus.

He said that the Iranian government has issued a health certificate to all travelers under the mandatory screening process as per the directions of President Hassan Rouhani so that if any Pakistani traveler is tested positive he could be treated in Iran.

In the meeting, Mohammad Rafiei extended an invitation from Governor of Sistan and Baluchestan province Ahmad Ali Mohebbati, to Chief Minister Jamal Khan to visit Iran.

Chief Minister Balochistan said that both countries will continue their efforts to further strengthen bilateral relations.

He expressed deep sorrow over the loss of lives in Iran in the wake of the situation, created by the coronavirus.

“A false impression regarding the spread of the coronavirus was given, that pilgrims were the reason for the spread of corona. We have placed all the people returning from Iran on an emergency basis in quarantine on an emergency basis. Travelers, including pilgrims, were kept for several days in Taftan and Quetta and were handed over to their provinces,” Jam Kamal said.

The Chief Minister expressed his best wishes for the Consul-General and said that after the eradication of coronavirus, the relations between the two countries will find a new dimension in all fields.

He assured that Pakistan would soon resume border trade with Iran in accordance with health standards.

During the meeting, Rafiei announced the readiness of Iran to develop technical engineering cooperation with Pakistan, including the repair of roads and railways between Taftan and Quetta, as well as the development of urban services with the state government.

He added the government of Sistan and Baluchestan is ready to sign a health protocol to continue trade between the two countries within the context of coronavirus which the Pakistani side promised to pursue the case.