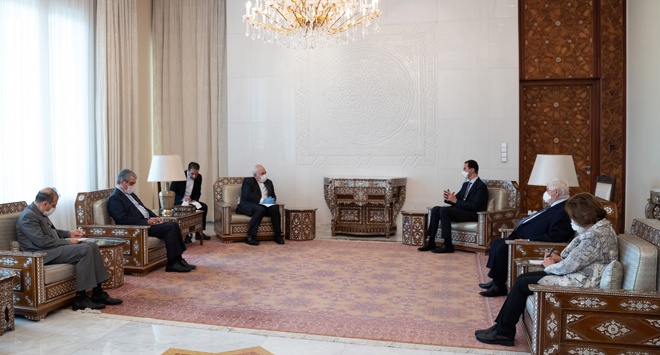 Zarif: US assassination of Gen. Soleimani not to prevent Iran from backing resistance movement

IRNA – Iranian Foreign Minister Mohammad-Javad Zarif in a meeting with Syrian President Bashar al-Assad on Monday said that there will be no change in Iran’s path to support the resistance after the US terrorist army assassinated Lieutenant-General Qassem Soleimani on January 3.

Zarif also thanked the Syrian representatives for having participated in the funeral procession of General Soleimani.

He arrived in Damascus on Monday to meet with the high-ranking Syrian officials.

Al-Assad expressed condolences over the death of the people who lost their lives to the coronavirus in Iran.

During the meeting, Zarif said that now the real intentions of the US by not removing the oppressive sanctions on the Iranian people in the hard times of the coronavirus outbreak have been disclosed.

Referring to UN Special Envoy of the Secretary-General for Syria Geir Pederson’s phone call on Sunday and the consultations that are to be held in the near future between Iran, Turkey, and Russia, as the three guarantors of Astana Talks, Zarif discussed the latest developments of Syria, including the committee of the constitution, Idlib, and political process with the Syrian president.