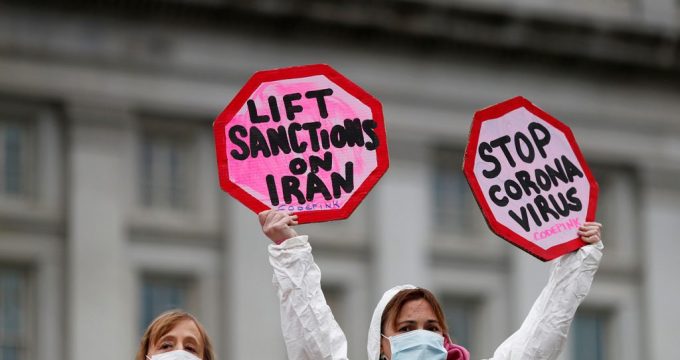 Iran Review – A bipartisan group of two dozen American and European national security leaders issue a joint statement urging the US government to ease humanitarian trade with Iran in light of the COVID-19 pandemic. “As the world grapples with COVID-19 – the disease caused by the novel coronavirus – we must remember that an outbreak anywhere impacts people everywhere. In turn, reaching across borders to save lives is imperative for our own security and must override political differences among governments” the authors write.

The statement comes in reaction to US President Donald Trump’s recent remarks on considering humanitarian assistance for Iran, which he says is contingent on Iran asking for such help. While an announcement from the Iranian government that it welcomes assistance from all states and institutions might resolve this problem, the signatories feel that aid cannot replace focused sanctions relief and that this should not be based on any preconditions. The proposed measures to ease humanitarian trade with Iran should be taken up immediately by the US government to support ongoing efforts to combat the COVID-19 pandemic in Iran and across the world.

The full statement is in full below:

Like many Americans and Europeans, Iranians are also facing one of their country’s darkest times in living memory. As the world grapples with COVID-19 – the disease caused by the novel coronavirus – we must remember that an outbreak anywhere impacts people everywhere. In turn, reaching across borders to save lives is imperative for our own security and must override political differences among governments.

Iran’s reported case fatality rate – which may greatly understate the true numbers – is one of the highest in the world. Though never intended to kill, US “maximum pressure” through sanctions on Iran are compromising the performance of the Iranian healthcare system as Iran’s outbreak moves into its second month. Despite humanitarian exemptions provided under US and international law, these sanctions make the importation of medicine, medical equipment and raw materials needed to produce these goods domestically slower, more expensive, and complicated – when even possible – by deterring potential suppliers out of fear of overstepping sanctions’ limits.

Like every country – even one as large and wealthy as the United States – success in fighting the virus requires that Iran have flexible, reliable and affordable means of importing these crucial supplies through commercial channels. The Trump administration’s sanctions on Iran are the most extensive coercive economic measures ever imposed on a country. A focused reduction in overall pressure would have a significant impact on the ability of Iran’s healthcare system to respond to the COVID-19 outbreak, potentially saving the lives of hundreds of thousands of ordinary Iranians and, by helping to curb the virus’ rapid spread across borders, the lives of its neighbors, Europeans, Americans and others.

Given military escalation between the US and Iran earlier this year, the possibility of diplomatic engagement with Iran has already narrowed, and a lack of relief may shut down chances completely. Such relief would not change the overall posture of the Trump administration’s policy towards Iran or sacrifice any meaningful leverage for future negotiations on Iran’s nuclear, missile, or regional policies. However, a failure to provide relief could have significant and long-lasting consequences for the reputation of the United States and Europe among the Iranian people. This would starkly raise the political costs of engaging with either the US or Europe for any current or future Iranian decision-makers while simultaneously boosting the influence of Iran’s non-Western partners.

The United States has said that it has offered assistance to Iran but has not made the details or any potential conditions public. However, given the high level of tensions and mutual distrust between Tehran and Washington, it is unrealistic to expect that Iran would tie itself to US aid to tackle a national emergency or ask Washington for help. Offering aid with one hand while taking away much more through the pressure of crippling economic sanctions with the other is not a coherent posture.

Iran has received timely and important aid from the E3/EU (France, Germany, the United Kingdom, and the European Union), as well as Japan, China, Russia, Qatar, Kuwait, the United Arab Emirates, and others. While this aid has played an important role in the early days of the crisis, Iran cannot depend on this limited assistance alone, especially as the pandemic becomes more severe in many of the donor countries.

Just as the COVID-19 pandemic has upended every aspect of the global economy and of human lives and health, it has drastically changed the impact of a US policy designed for a different purpose and conditions. Just because Iran has managed the crisis badly, that does not make its humanitarian needs and our security ones any the less. Targeted sanctions relief would be both morally right and serve the health and security interests of the United States, Europe, and the rest of the world.

Substantial measures that maximize benefits for Iran’s public health system must garner broad political support and be straightforward for the United States and Europe to implement, particularly as they both face growing public health crises at home. Measures that the US government should pursue include the following:

Expand the scope of humanitarian exemptions under U.S. sanctions to directly include devices and equipment necessary to effectively combat COVID-19. This expanded scope should allow companies to make use of General License No. 8 (GL-8) when exporting these items. Many examples of medical devices and equipment, such as oxygen generators, full-face mask respirators and thermal imaging equipment, require a specific license from the US Office of Foreign Assets Control (OFAC) in order to be exported by US companies. Even when there is no US connection, these items are nonetheless not covered by the humanitarian exemption clarified under GL-8, meaning that the Central Bank of Iran cannot have a role in the facilitation of the export without exposing European and other banks to U.S. sanctions. This is a significant impediment to European exports of these items.

Add staffing and other resources at OFAC to speed-up the licensing process to enable a greater number of manufacturers to supply the Iranian healthcare sector and to empower more non-governmental organizations (NGOs) to raise funds and provide relief services.

Issue comfort letters to European and other non-US banks, as well as for as many entities in the value chain as possible – such as manufacturers, shippers, and insurers – that already are conducting enhanced due diligence, in order to reassure them that they will not run afoul of OFAC if they provide a function for humanitarian trade with Iran.

Offer regular updates on the operationalization of the US-sponsored Swiss Humanitarian Trade Arrangement (SHTA) and relax its stringent reporting requirements, which are a significant disincentive to any Swiss companies that might consider making use of the SHTA.

Make clear to countries that were granted waivers to continue purchases of Iranian oil and that as a result are now holding significant amounts of Iranian money in escrow that those funds can be used to pay for humanitarian exports to Iran.

Provide funding to the World Health Organization (WHO) to enable further deliveries of aid and technical assistance to Iran.

Do not interfere if the International Monetary Fund (IMF) board votes in favor of providing Iran with requested emergency financing. A loan from the IMF would help Iran address its balance of payments crisis and pay for imported medical equipment.

Signed by members of the European Leadership Network and The Iran Project:

Secretary Madeleine Albright, former US Secretary of State and Ambassador to the United Nations

Ambassador Nicholas Burns, former US Under Secretary of State for Political Affairs, Ambassador to NATO and Greece, and Spokesperson for the US Department of State

Secretary William Cohen, former US Senator and Secretary of Defense

Senator John Danforth, former US Senator and Ambassador to the United Nations

Secretary Chuck Hagel, former US Senator and Secretary of Defense

Secretary Paul O’Neill, former US Secretary of the Treasury