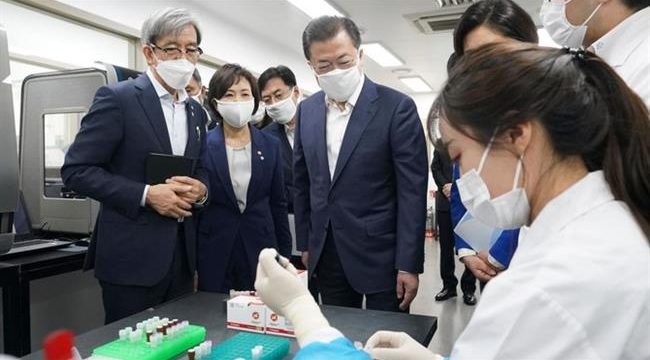 Press TV – Iran says South Korea has rejected a SWIFT payment request by Tehran for purchase of coronavirus testing kits over the US sanctions.

“As a result, the Korean bank rejected Iran’s request and the kits were not delivered to Iran,” he said.

According to the document, London-based Iran International television channel falsely claimed that the SWIFT request had been made by a software company which sought to export non-medical goods to Iran.

Jahanpour released a second document which shows South Korea’s Mico BioMed, which develops and sells medical kits, had in fact presented the SWIFT request to the bank.

“The SWIFT request related [to Iran’s purchase of test kits] has been rejected by the Korean bank under the pretext of sanctions,” he said.

“This shows claims of medicine and medical equipment not being subject to sanctions are lies. The bank has officially stated that the purchase is not possible due to the sanctions,” Jahanpour added.

Belgium-based SWIFT, the Society for Worldwide Interbank Financial Telecommunication, is used to transmit payments and letters of credit.

The US government has intensified its sanctions on Iran despite international calls on Washington to suspend them to allow the Islamic Republic to secure necessary medicine and equipment in the midst of the coronavirus fight.

Washington claims the sanctions do not target medicine for Iran, but they make it all but impossible for importers to obtain letters of credit or conduct international transfers of funds through banks.

Last week, Iran’s Permanent Mission to the United Nations in New York dismissed the Swiss Humanitarian Trade Arrangement (SHTA) which the Europeans belatedly announced with much fanfare to have made operational in coordination with the US to barter medicine and food with Iran.

The mission said the United States has forced SHTA to pursue a very tight and tough procedure, making it practically very difficult for companies to trade with Iran.

“Additionally, almost impossible or cumbersome nature of transferring Iran’s reserves blocked outside the country to the designated Swiss bank, not only does not allow the SHTA to function properly now but may actually render it redundant in a matter of few months,” it said.

According to the mission, several companies that supply the medical equipment required to fight the coronavirus have recently stopped shipping to Iran because the current US sanctions regime makes the shipping of such items to Iran almost impossible.

Washington has imposed new sanctions in the midst of the coronavirus, targeting trade with Iran, even as President Donald Trump has claimed that the US was ready to help with the outbreak if Tehran asked for it.

The Islamic Republic has rejected the offer as hypocritical while the US is refusing to lift the sanctions and even intensifying them. Officials have said Washington’s demand that Tehran make a direct plea for the removal of sanctions shows the United States seeks “nothing short of surrender”.

Iran’s UN mission said last week the only message the US is sending with intensifying its sanctions amid the coronavirus is that companies must avoid doing any business with Iran, even if their work is humanitarian in nature.

Meanwhile, certain sections of mainstream media act as a virtual arm of the Office of Foreign Assets Control (OFAC) which is responsible for administering the US sanctions regime.

They have been on a witch hunt to identify Iran’s financial institutions and report them to the US government for possible sanctions.

Iran International, launched in May 2017, is a regular megaphone for separatists and terrorist groups operating against Iran. It is best known for airing disparaging reports about Iran and trying to stoke unrest in the country.

In October 2018, The Guardian cited a source close to the Saudi government as saying that Iran International had received an estimated $250 million from the Saudi royal court for its launch.