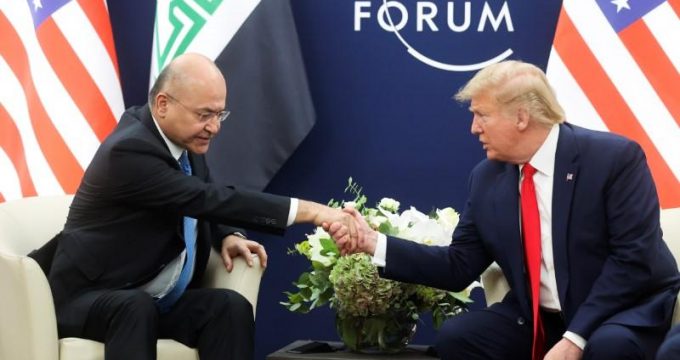 Iran Ex-Envoy: US bid for strategic dialogue with Iraq to get nowhere

Tasnim – A former Iranian ambassador to Baghdad said the US plan for strategic dialogue with the Iraqi government will not meet with success unless Washington shifts its policy of pressures and threats and seeks to establish healthy relations with Iraq.

In an interview with Tasnim, Hassan Kazemi Qomi said there is no chance of success for the US’ idea of holding strategic dialogue with the Iraqi government in June 2020. “I believe that there won’t be any new dialogue, and no new development is to happen.”

The ex-envoy said Iraqis would agree to establishing genuine relations with the US only if Washington respects the interests of Baghdad, otherwise they will strongly oppose the US’ call for dialogue especially if Washington ignores the Arab country’s interests through pressures and threats.

“I believe that a new strategic dialogue will not take place unless the Americans seek a proper presence in Iraq, and this will be possible when Washington abandons its illegitimate objectives,” Kazemi Qomi said.

“But, considering that the US has an aggressive nature, I believe that such a thing will not take place and the (American) threats and allurement will not work.”

The former Iranian ambassador went on to say that the US once adopted a strategy to widen the social gaps in Iraq in order to take control of the Arab country’s security situation, adding, “The US that once claimed it had come to Iraq to establish security is now gripped by insecurity itself, because it was the Americans who created terrorist groups, including Daesh (ISIL), in Iraq and confessed to doing so later.”

Kazemi also stated that the US favors an Iraqi government that would not implement the bill on the withdrawal of American military forces.

One of the White House’s main concerns is to prevent Iraq’s close relations with its neighbors, including with Iran, he said.

“Today, Iraq’s security and defense power are based upon people, but the Americans are trying to undermine Iraq’s defense strategy. This would strengthen the chance of American interference (in Iraq),” he concluded.

US State Secretary Mike Pompeo announced on April 7 that the US would hold a strategic dialogue with Iraq in mid-June.

“All strategic issues between our two countries will be on the agenda, including the future presence of the United States forces in that country and how best to support an independent and sovereign Iraq,” Pompeo said.

In early January, Iraq’s parliament passed a resolution telling the government to end the presence of foreign troops in Iraq and ensure they not use its land, air, and waters for any reason.

The move came after the assassination of IRGC Quds Force Commander Lt. General Qassem Soleimani, the deputy head of Hashd al-Shaabi Abu Mahdi al-Muhandis, and a number of others in a US airstrike in Baghdad.

They were killed in the strike by American drones near Baghdad International Airport in the early hours of January 3.