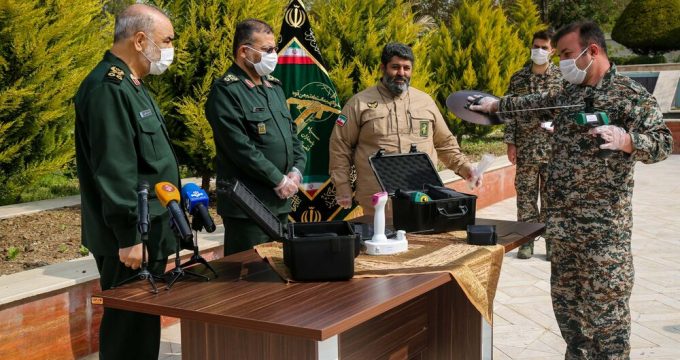 Press TV – The Islamic Revolution Guards Corps (IRGC)’s spokesman hails the scientific prowess of Iranian experts in developing a smart technology for detecting and diagnosing the new coronavirus, saying the device’s features are soon to be unveiled in detail at a media event.

Brigadier General Ramezan Sharif called the development of the device, which is dubbed “Mosta’an (the One Sought for Help),” a product of “Iranian resourcefulness and audacity,” Tasnim news agency reported on Thursday.

The production process leading to development of the device as well as its features and technical capabilities will be announced in near future in the presence of experts and media representatives, he added.

The technology that enables detection of infected surfaces and diagnosis of those carrying the virus within a 100-meter radius in only five seconds was inaugurated in Tehran on Wednesday, in the presence of Major General Hossein Salami, the elite defense force’s chief commander.

Speaking at the ceremony, General Salami said the “novel and singular scientific advancement” has been brought about by the scientists serving the country’s Basij volunteer force.

The device, Salami explained, generates a magnetic field that screens its surroundings, and is fitted with an antenna that points in the direction of infected targets upon detecting them.

Describing its plus points, the commander said the technology eliminates the need for blood samples, can also be handled remotely from its targets, is suitable for mass screening purposes, and averts unnecessary disinfection processes.

Elsewhere in his remarks, the IRGC’s spokesman said production of “Mosta’an” was owed to successful application of the knowledge-based capacities of the Iranian scientific community, adding that it also received the support of the IRGC’s Basij Force.

The device enables “momentary” detection of the virus with 70- to 80-percent accuracy and has been tested throughout a 10-day-long period across at least 10 hospitals before being unveiled, Sharif said.

He called it an “indigenous Iranian” achievement that has come about in “the year designated as the year of jump in production,” the title assigned to the Iranian new year by Leader of the Islamic Revolution Ayatollah Seyyed Ali Khamenei.

The official also pointed to reactions to the innovation by media outlets and networks that are associated with foreign powers.

The reactions, he said, “are majorly a result of their feelings of weakness, inferiority, and desperation in the face of the Iranians’ might and will in resolving what has embroiled not only the Iranian nation, but also other nations and societies.”

Since emerging in central China late last year, the novel virus that can lead to a potentially fatal respiratory infection called COVID-19 has killed above 137,000 and infected more than 2,100,000 people worldwide.

Iranian defense forces assigned all their relevant resources to the fight against the viral outbreak after its emergence in the country in February.

Among other things, the efforts manifested themselves in biological defense drills as well as the Defense Ministry’s development of testing kits and diversification of its activities to include mass-production of disinfectants.