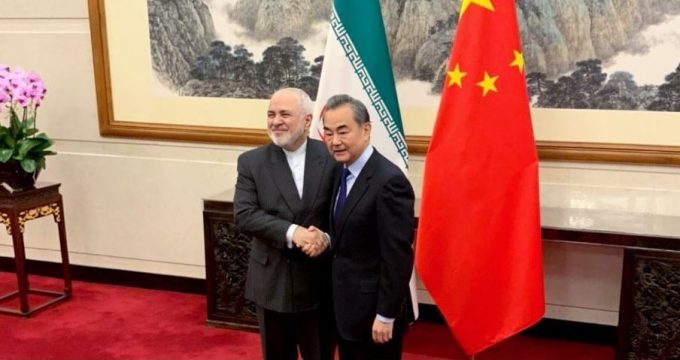 FNA – Iranian Foreign Minister Mohammad Javad Zarif and his Chinese counterpart Wang Yi in a phone conversation underlined the need to reinforce the two countries’ strategic partnership in the joint fight against coronavirus.

During the phone talk, the two sides underlined that it is necessary for Iran and China to confront the US antagonistic policies, including unilateral and inhuman sanctions against the Iranian nation.

Zarif and Wang Yi also shared views on political developments in Afghanistan and restoring peace and stability to that country.

Meanwhile, Zarif in a message on Wednesday criticized the US for defunding the World Health Organization (WHO), saying US bullying is killing people.

“The world is learning what Iran has known & experienced all along: US regime’s bullying, threatening & vainglorious blathering isn’t just an addiction: it kills people,” Zarif wrote on his Twitter account.

“Like maximum pressure against Iran, the shameful defunding WHO amid a pandemic will live in infamy,” he added.

US President Donald Trump has halted funding the World Health Organization after accusing it of helping China to cover up the spread of coronavirus.

In a relevant development on Monday, Iranian Ambassador to China Mohammad Keshavarzzadeh thanked the Chinese government and people’s aid to Iran, and said the contributions serve to develop Tehran-Beijing relations.

Keshavarzzadeh made the remarks in a ceremony marking the donation of 70 artificial oxygen concentrators to Iran by Pundarika Charity Foundation in Beijing.

Iranian people have good memories of the Chinese people as hardworking and thoughtful people, Keshavarzzadeh noted.

Artificial oxygen concentrator is an essential device for patients and they will be shipped to Iran soon.

Keshavarzzadeh expressed happiness for Chinese response to overcome the threat posed by coronavirus to humanity.

Meanwhile, an official in Pundarika Foundation Yu-Dong Li said that the foundation is an international institution which has branches all over China.

Referring to the Iranians’ aid to China at the beginning of coronavirus outbreak, she said China has also plan to help Iranians.

Iran and China are the two ancient civilizations and current problem have created an opportunity for developing relations between two countries.

Chinese people in less than 24 hours, donated half a million dollar to Iran for fighting coronavirus epidemic and called for launching a channel for collecting non-cash contributions.

On March 5, the Iranian embassy in China released a message in ‘Weibo’ which is a leading social media in China and introduced a bank account for Chinese people’s cash contributions to fight COVID19 and people of China helped 4b Yuan ($576,000).

In response to Chinese people memorable act, Iranian embassy in a message said Chinese people’s good-will “has impressed us and we now feel a heavy responsibility toward them”.

It added that aid provided by Chinese people will be spent for fighting coronavirus outbreak.