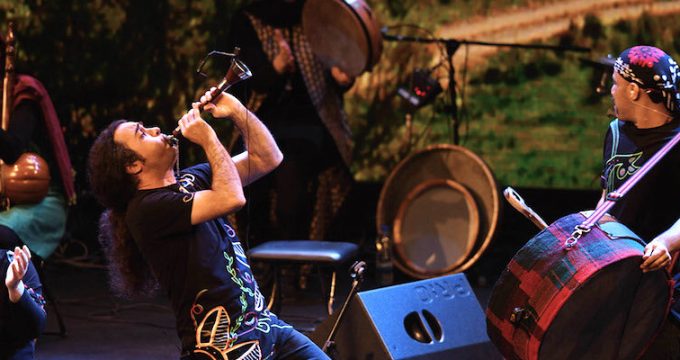 In a time of crisis, Iranians seek comfort, connection through music

Bourse and Bazaar | Khosro Kalbasi: Iran is enduring one of the world’s worst outbreaks of COVID-19. Over 73,000 infections have been confirmed in official figures. Faced with uncertainty and isolated during a national lockdown, Iranians have sought comfort and connection through music.

The coronavirus outbreak has wrecked Iran’s cultural calendar, straining the finances of theaters and the livelihoods of performers. But Iranian artists are rising to the occasion, finding ways to ensure their music reaches audiences at a time when it is needed most.

Concerts are being given in empty performance halls, but streamed to millions online. Musicians are practicing in the solitude of their homes, but connecting with fans on social media.

Alternative band Bomrani, whose sound combines influences from traditional Iranian music, jazz, and gypsy punk, had planned to give four concerts in March—all canceled due to the outbreak. The band decided to experiment with an online concert

With Bomrani’s six members social distancing, they decided to release a recording of a concert performed last year on the grounds of Sa’dabad Palace. They used Instagram to stream the concert. The platform’s chat function allowed the band to connect with fans during the stream.

“It was really nice. The whole band was online. We were chatting with each other, making jokes, and fooling around. This created an intimate atmosphere,” said lead singer Behzad Omrani.

“People later told us that it felt as if Bomrani had thrown a party and we were sitting next to them listening to the music,” he added.

The band had tried live-streaming performances before. “But we didn’t take it that seriously. You can’t compare anything with the joy of performing in front of an audience but we have to make do with what we’ve got.”

Despite the serious times, Omrani explains that the band isn’t taking their online performances too seriously. “I don’t look at these concerts as doing society a service,” Omrani explained. “That’s not what art is to me. Giving online concerts is a way for me to express myself, to be myself, and to enjoy myself.”

Despite this, Bomrani do not shy away from difficult topics in their music. “We’ve got an album in the pipeline, ‘Probably There Is No Hero’. It’s about all we have been through over the past year both personally and as a country,” he said.

He thinks the music industry in Iran will be changed by the experience of the coronavirus. “The outbreak has catalyzed a transformation. Five or six years ago no one would have believed that one day musicians would throw online concerts in Iran. Things are changing and they are changing fast.

Iranian authorities have also sought to use the power of music. But the concerts have not been without controversy.

As part of a broad “stay at home” campaign, Tehran Municipality organized a series of online concerts between March 27 and April 9. The concerts were recorded live at the central hall of Tehran’s iconic Milad Tower and streamed online, reaching a staggering five million viewers.

The popularity of the first concert caught the attention of the leadership of IRIB, the state broadcaster and de facto media regulator. Reports emerged that IRIB had prohibited the concert organizers from streaming video of the performers on stage.

On March 28, a performance by musician Omid Jahani was streamed with scenes from nature rather than video of the performer. But the following day, IRIB denied imposing any such rules and the concerts were streamed as originally planned, bringing performances from the likes of Roozbeh Bemani, Reza Yazdani, Sadollah Nasiri and Mohsen Sharifian into the living rooms of Iranians across the country.

Musician Siavash Mollaeian plays the kamancheh, a traditional string instrument that features in Iranian, Kurdish, and Azerbaijani music. He is an unlikely convert to online performances. “I’ve never been into social media and giving online concerts. It was never my thing,” he said.

“Following the outbreak, I was feeling down. Then a friend reached out to me and asked me totally out of the blue, ‘Why aren’t you giving concerts on Instagram? It would be really nice and you’d enjoy it.’”

After mulling it over for a few days, Mollaeian decided to give it a shot.

Now, regularly gives live performances for his followers on Instrgram. “I received messages telling me that my music instills a sense of calmness and rekindles hope. I didn’t expect that,” he said.

Mollaeian believes that the uncertainty introduced by the pandemic has taken a toll on people, who are increasingly anxious about the future. “My music is a reflection of my personal struggles. I think coming across works of art, people see what they long for. And these days what people need is peace of mind and hope.”

In a time of crisis, a deeper sense of community has emerged. “People are working hard to rekindle long lost friendships. They are more willing to go the extra mile to get in touch with strangers, to forge new fellowships, to go beyond boundaries,” Mollaeian explained.

Two weeks ago, Mollaeian reached out to Aida Shahghasemi with a simple invitation: to perform a duet.

Shahghasemi is an Iranian-born singer and kamancheh player living in Minneapolis, Minnesota. She and Mollaeian have never met in person—they got to know one another through social media.

“We have known each other for years. We had discussed doing a joint project but had never managed to do so,” Mollaeian said.

The pandemic provided the two artists with a chance to bridge the 10,000-kilometer gap between Iran and the United States.

Shahghasemi is a music teacher who has also had to adapt as the coronavirus outbreak in the United States worsened. “My husband and I, along with our dog, have been self-isolating since March 13. Following the outbreak, I had to switch to giving online classes,” she said.

She has seen a surge in demand for classes over the past few weeks as people search for new hobbies to pass the time. But Shahghasemi thinks that for most of her new students, learning music, like the lockdown, will be temporary. “I think many of them might not have enough time to continue taking lessons after the pandemic is over,” she noted, wryly.

After agreeing to play a duet, Mollaeian and Shahghasemi did a trial run to test their Internet connection. But otherwise, they decided improvise their performance. On April 3, they performed a few pieces live on Instagram.

For Shahghasemi, the online performance lacked the ritual and the connection with the other musicians that make concerts special. “With these online performances, artists go online, people pop in, listen to half a song, get distracted by notification on their phones and drop out. It certainly wasn’t as fulfilling as performing in front of an audience,” she admitted.

Shahghasemi is hesitant to give it another try. “Maybe I’m holding myself back but I’m open to collaborating with my fellow artists and friends.”

But for Mollaeian the concert still felt meaningful, perhaps because of the lack of context. “While playing the duet it felt as if she was sitting next to me. So far, yet so close. We are practicing social distancing, but are we really distancing from each other? To me, it doesn’t seem that way. The crisis is bringing people together. New connections are being made.

“Iranian, American. In the face of this pandemic, these differences are immaterial,” Mollaeian said, referring to the longstanding animosity between the governments of the United States and Iran.

“Humans have been divided by borders and boundaries for ages. Technology has afforded us the opportunity to cross such boundaries—and with our music we have.”