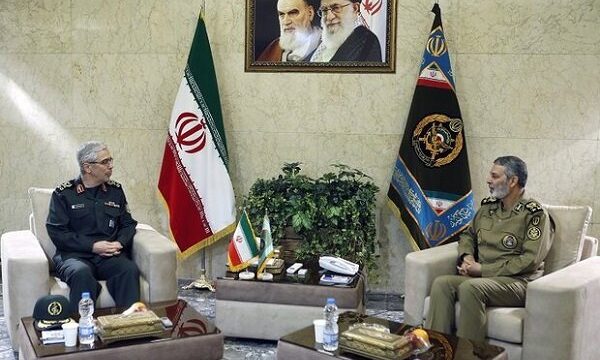 MNA – The Chief of Staff of Iran’s Armed Forces Major General Mohammad Bagheri said that Army Forces of the country showed excellent performance in the fight against coronavirus.

He made the remarks in his meeting with the Commander of Iran’s Army Major General Seyyed Abdolrahim Mousavi on Thu.

While congratulating the Army Day, Bagheri added, “Iran’s Army is performing its missions more authoritatively and efficiently under the guidelines of Leader of the Islamic Revolution.”

Turning to the outbreak of coronavirus in the country, Bagheri stated, “in the early days of the outbreak, the Army Forces of the country outshined in its mission spontaneously, even at the mission that had not been defined and managed to render considerable services to the noble nation of Islamic Iran at hospitals, roads, different cities and convalescent centers.”

For his part, Commander of Iran’s Army Major General Seyyed Abdolrahim Mousavi said that Army’s healthcare and treatment capacities, for offering relief services to the Coronavirus Combat and Prevention HQ, will be at the service of the noble nation of Islamic Iran.

After the outbreak of the novel coronavirus in China, the Army Forces of the country took drastic measures and prepared its necessary facilities to offer quality medical services to the people, he said.