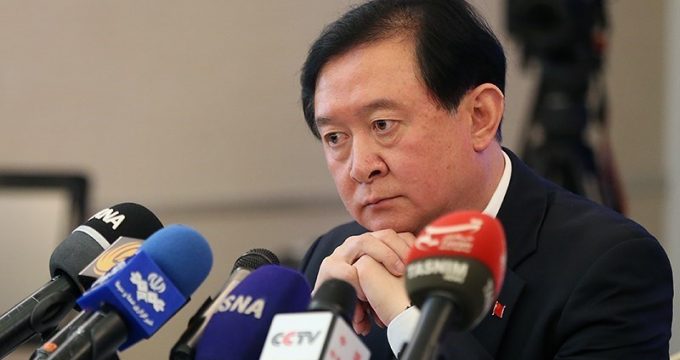 Tasnim – China’s Ambassador to Tehran Chang Hua called on the US to immediately remove its sanctions against Iran and stop hampering the country’s response to the COVID-19 crisis.

“(US) sanctions are obviously contrary to the humanitarian principle and seriously obstruct Iran’s fight against the epidemic as well as the humanitarian aid to Iran by the UN and other international organizations. Iran’s 80 million people’s difficulties in their fight against COVID-19 due to American sanctions are also not conducive to the efforts in the Middle East and beyond. China urges the United States to immediately lift sanctions against Iran and avoid hindering Iran’s epidemic response and harming Iranian people’s livelihood,” Hua told Tehran Times in an interview published on Tuesday.

He added, “China has always resolutely opposed the United States invoking its domestic laws and imposing unilateral sanctions and so-called ‘long-arm jurisdiction’ against other countries including China. We also call on the international community and Iran to strengthen cooperation and jointly safeguard global and regional public health security”.

Iran — the worst-hit state by the coronavirus spread in the Middle East — has been doing its utmost to contain the respiratory disease despite the hardships created by the US sanctions.

Iran’s Health Ministry spokesman said on Tuesday that the number of people tested positive for COVID-19 across the country has reached 74,877.

Kianoosh Jahanpoor said COVID-19 has taken the lives of 98 patients in Iran during the past 24 hours, bringing the total death toll to 4,683.

He added that 48,129 coronavirus patients have recovered from the disease so far and have left the hospital.