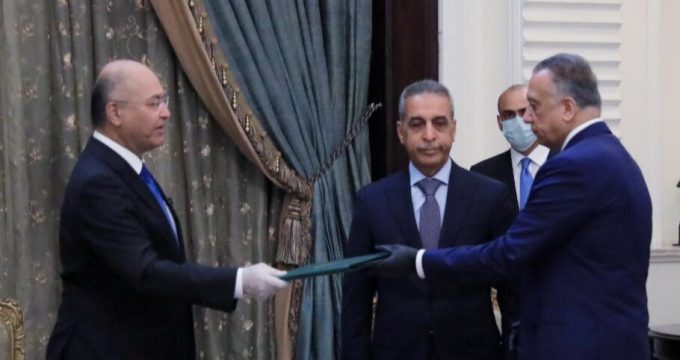 Iran and the US agree on Iraq’s latest nominee for prime minister. But will Iraqis?

The Washington Post | Mustafa Salim and Louisa Loveluck: When Iraq’s sharp-suited intelligence chief accepted his nomination for prime minister Thursday, 17 years to the day that U.S. troops marched into Baghdad, the challenges ahead seemed steeper than at any point since the invasion transformed Iraq.

The novel coronavirus is stalking the nation. Oil prices have plummeted low enough to push the economy toward catastrophe. Iran-backed militias and U.S. troops are facing off around Iraq’s military bases, and Islamic State militants remain a concern, biding their time and dreaming of a comeback.

The attendee list for Mustafa al-Kadhimi’s nomination ceremony underscored the stakes. Perched on the gilded chairs were a who’s who of the country’s political elite, putting on a show of unity for the first time since mass protests toppled Prime Minister Adel Abdul Mahdi’s government in the fall and pushed Iraq into crisis.

Kadhimi is the country’s third prime minister-designate in the space of 10 weeks, and the political uncertainty has threatened a leadership vacuum at the time that Iraq can least afford it.

As the United States and Iran wage a shadow war across the Middle East, Iraq has become their most volatile battlefield. Officials and experts predict that Kadhimi, a backroom operator with a reputation for juggling alliances in Washington, Tehran and the wider region, is likely to overcome the hurdles that felled two candidates before him, in large part because he has the rare distinction of being acceptable to both the United States and Iran.

“He has been able to walk this really fine line between Washington and Tehran,” said Randa Slim, director of the Conflict Resolution and Track II Dialogues Program at the Middle East Institute in Washington. “He might not be Tehran’s number one choice, but he is an acceptable choice for Tehran.”

In the months since President Trump ordered the January killing of Iranian Maj. Gen. Qasem Soleimani in a drone strike outside Baghdad International Airport, Iran-linked political factions have ramped up pressure on U.S. troops to leave Iraq. Paramilitary groups have also stepped up their campaign of rocket attacks targeting U.S.-led coalition forces and killing Iraqi soldiers in the crossfire.

Meanwhile, Washington is pressing the Iraqi government to distance itself from Iran, asking Iraqi security forces to pursue those responsible for the rocket strikes and increasing pressure on Baghdad to reduce its dependence on Iranian energy exports, which are targeted by U.S. sanctions. The U.S. government has made short-term sanction waivers for Iraq dependent on its progress in outlining plans to diversify its supply away from Iran.

The competing pressures from the United States and Iran are intense.

“Al-Kadhimi’s first big job if approved will be to define what Iraq can pragmatically request from, and offer to, both,” said Kristen Fontenrose, director of the Scowcroft Middle East Security Initiative at the Atlantic Council and a former senior official on Trump’s National Security Council, in a research note published Thursday.

Iraqi officials with knowledge of the backroom deals that led to Kadhimi’s nomination said he had agreed not to intervene in the affairs of the country’s militias, some of which have strong ties to Iran, in return for the support of Shiite Muslim political blocs that had scuppered the candidacy of two previous prime minister nominees. The officials spoke on the condition of anonymity due to the sensitivity of the situation.

Zurfi had been widely viewed as antagonistic toward the militias, and as a result, his candidacy hemorrhaged support in its final days. One by one, his former backers issued statements favoring Kadhimi, a man who wasn’t even nominated for the role at that point. He resigned formally Thursday morning, and within hours, the nomination cycle had started afresh.

“With my mandate to lead the Iraqi government, I pledge to my honorable people to work to form a government that puts the aspirations and demands of Iraqis as the top priority,” Kadhimi tweeted shortly after his appointment was announced.

An Iraqi official familiar with the militias’ position said that Kadhimi had garnered acceptance in part because he was seen as someone who could convince Washington to continue its sanctions waivers as crashing global oil prices slash the state’s ability to fund itself.

“They don’t fully trust Kadhimi, but they also do see him as a person they can deal with,” the official said. “At this stage, everyone wants to do their best to keep the waivers.”

Kadhimi’s nomination had been attended by Hadi al-Amiri, the leader of Iraq’s militia network. But one of the influential groups in the network responded Friday in anger, describing the intelligence chief’s candidacy as a “declaration of war against the Iraqi people.” Kataib Hezbollah, whose forces have been bombed by the United States, has previously accused the intelligence chief of complicity in the drone strike that killed Soleimani on Jan. 3. The group remained silent on his nomination Friday.

“The onus is now on Iraqi political elites to put personal agendas on hold and expedite the formation of a good-enough-for-government-work cabinet, since doing so may be the one thing that can prevent Iraq from becoming a war zone again,” Fontenrose said.

The challenges it will face are more tangled and extensive than at any point in Iraq’s recent history.

As doctors work overtime to contain the coronavirus crisis, government officials must work out how to steer the economy away from a financial calamity that could spark even larger and angrier protests than those that felled the country’s last premier.

“The corona and oil price crisis was a major fear for the Iraqi political establishment,” said Renad Mansour, a research fellow at Chatham House’s Middle East and North Africa Programme. Their only way forward was to agree on Kadhimi, a man “who promises to play by the rules of the game.”

Iraq relies on oil sales for 90 percent of its revenue and has no clear plan to make up for the shortfall of billions of dollars that tanking global prices will likely spark. Among other things, this would make it impossible for the government to cover the wage bill for some 3 million employees.

In one of his final interviews before stepping aside, Zurfi had laid the problem out in the starkest of terms. “Next month, we won’t be able to secure half of the salaries,” he told Iraqi state television. “You will experience true suffering.”

Iran-US tensions, Mustafa al-Kadhimi, Soleimani assassination April 12, 2020
World Council of Churches calls for lifting of sanctions on Iran
How the IMF can help Iran despite US objections