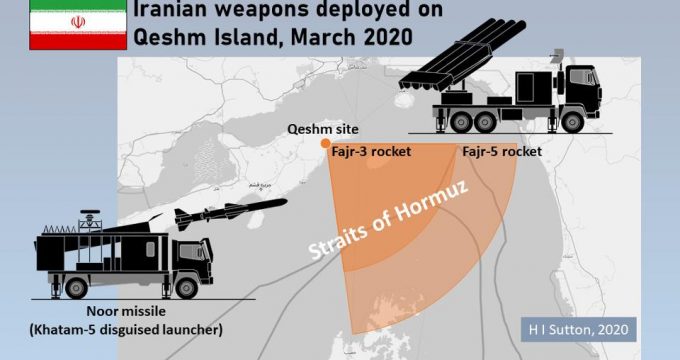 Forbes | H I Sutton: Evidence suggests that Iran has deployed an array of anti-ship missiles and large rockets overlooking Strait of Hormuz. The Strait is vital for the supply of oil from the Arab states of the Persian Gulf. The waterway is being patrolled by U.S. Navy and its allies to protect vessels from Iranian action.

Multiple amateur videos and photos of the weapons lined up on overlooking the beach began surfacing on social media on April 4. Geospatial analysis has confirmed that the location of one of the batteries is on Qeshm Island.

The Open Source intelligence (OSINT) shows the weapons were deployed beside the coast road, facing east towards the Strait, between Qeshm and Borka Khalaf. They were lined up behind a protective sand berm. The space between them suggests a tactical deployment. Although whether it is an exercise or a show of force, and whether or not it was supposed to be seen, remains unclear.

The weapons appear to belong the Islamic Revolutionary Guard Corps (IRGC). The systems seen include the Fajr-3 and Fajr-5 multiple launch rocket systems (MLRS). The Fajr-3 carries twelve 240mm (9.5 inch) rockets. These have a range of 27 miles and carry a large warhead. All twelve rockets can be loosed off in under two minutes.

The larger Fajr-5 can hit targets 45 miles away. Only four are carried on each launcher however. Unlike the Fajr-3, which was based on a North Korean design, this rocket appears to be truly Iranian in origin. In 2017 Iran revealed a satellite guided version with a reported range of up to 80 miles, but it is unclear whether this has entered service. From their positions the Fajr-3 rockets can reach most of the way across the Straits of Hormuz, and the larger Fajr-5s the whole Strait.

More potent than the rockets are anti-ship missiles. At least one mobile anti-ship missile launcher has been identified in the footage. The Khatam-5 system carries Noor sea-skimming missiles which are derived from the Chinese C-802 system. They are generally equivalent to the U.S. Navy’s Harpoon. They are carried on a truck which can be disguised as a regular civilian vehicle. The cab is the ubiquitous white and the missile and radar can be retracted into a box-like back. With the missiles in carry mode the vehicle would be very difficult to identify.

The location will be familiar to naval planners. There are several missile sites and naval facilities on the island, including one with an underground tunnel for boats and submarines. Deployment positions like this are transient and the systems have likely been moved since the imagery was taken. Their presence on the island sends a message of Iran’s preparedness however and reminds us that the Straits remain a potential flash point.

Iran continues to build up its naval capabilities across the board. The Iranian Navy recently announced that it is working on a large submarine and a 6,000 ton destroyer.