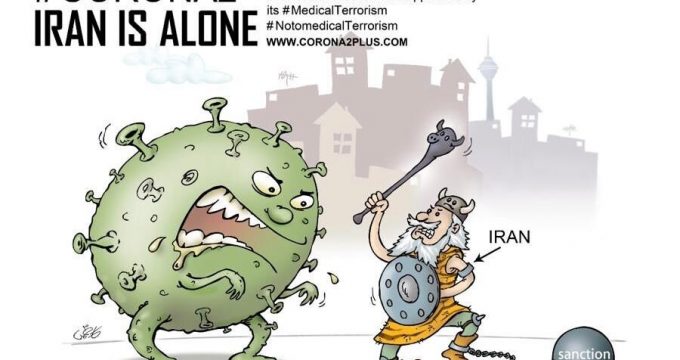 Bloomberg | Golnar Motevalli: Since Iran emerged as the epicenter of the coronavirus pandemic in the Middle East, its leaders have called on the U.S. to suspend economic sanctions so that they can more effectively fight and contain the pathogen. The U.S. State Department says that humanitarian goods, including medicine and medical supplies, are exempt and not subject to any trade restrictions. Yet years of punitive measures have turned Iran into a commercial pariah for most foreign banks and companies.

1. What do the sanctions laws say?

The Office of Foreign Assets Control says the U.S. has “consistently maintained broad exceptions and authorizations to support humanitarian transactions with Iran.” Exemptions for medical goods and medicine came into effect in 2001 under President Bill Clinton, who imposed the first major sanctions against Iran in 1995. These exemptions were periodically widened so that by 2012 they included agricultural products and most foods. After the U.S. and other world powers reached a 2015 deal with Iran on its nuclear program, the State Department made efforts to reassure banks and traders over transactions with Iran through roadshows and meetings at embassies. That approach was abandoned after President Donald Trump withdrew the U.S. from the deal and began a campaign of “maximum pressure,” seeking to force Iran’s leaders to abandon uranium enrichment and end support for militias and proxies such as Hezbollah, designated a terrorist group by the U.S.

2. So what’s holding back humanitarian imports?

There are several problems:

3. Why are the banks uninterested?

Most see any link to Iran as a “stain,” according to Carlo Giacoma, director general of the Brussels-based European Institute for Export Compliance, which advises businesses that want to trade with Iran. As with other sanctions campaigns, U.S. leverage rests with the central role American banks — and the U.S. dollar — play in the global economy. Anyone who violates the sanctions could see their U.S.-based assets blocked or lose the ability to move money via the U.S. banking system. That makes doing business tricky in a country where so many state institutions and associated conglomerates are sanctioned. “There is very little profit to be made from these exports,” said John E. Smith, an attorney at Morrison & Foerster who was the director of OFAC from 2015 to 2018. Meanwhile, the penalties for getting it wrong can top $1 billion.

4. Are there any exceptions?

There are just a handful of banks left in Iran that aren’t on the U.S. Treasury’s list and can facilitate payments for humanitarian goods on behalf of Iranian importers. But they need both capital to pay for the goods, access to foreign currency and a corresponding bank that can accept the payment on behalf of the supplier. According to Giacoma, three European banks, which he declined to name, have been executing payments for various imports to Iran, including humanitarian aid, but the volumes have declined dramatically over the past three years.

One indication of the tougher policy’s effect is the drop in applications for licenses to import medical goods that aren’t covered by OFAC’s general license. (Goods covered by general licenses can, in theory, be exported to Iran without any additional paperwork.) According to the Treasury, such applications dropped from 220 in the last quarter of 2016 to just 36 in the first quarter of 2019, the latest figure available.

Hundreds of businesses and importers, from local pharmacists to large companies producing generic drugs, have been affected, and the repercussions are felt by the general public. Pharmaceutical imports from the European Union in 2019 were down 15% from three years earlier, while U.S. shipments of mostly non-sanctioned humanitarian goods dropped to $3.9 million in February — down 88% from February 2016. Advocacy group Human Rights Watch says the worst-hit include patients with serious and rare conditions such as leukemia, epilepsy or eye injuries from exposure to chemical weapons during the Iran-Iraq war. An Iranian NGO which helps treat a rare skin condition said 15 children had died after Swedish companies stopped shipping specialist dressings to comply with sanctions. There have also been reports of dozens of deaths of Iranians ingesting industrial-grade ethanol and methanol in the misguided belief it would stave off the coronavirus.

7. Are there domestic issues?

Iran has for years developed ways to adapt to embargoes and sanctions, but the strain of the coronavirus outbreak — the worst in the region — has stretched its health system enormously at a time when money is extremely tight due to low oil exports and prices. The government has carved out 20% of the current annual budget to deal with the virus, is tapping an already depleted sovereign wealth fund for $1 billion as well as seeking to borrow from the IMF. Complicating things further, Iran’s health-care system is dogged by complaints of corruption and nepotistic practices. In one high-profile case, the daughter of a former industry minister was sentenced to 20 years in prison and 74 lashes for “illegally profiteering” by hoarding and smuggling pharmaceuticals. Iran’s own banking system is seen as lacking in transparency. After Iran’s parliament ratified legislation to bring lenders in line with global money-laundering rules, a senior political chamber, the Expediency Council, effectively rejected the bill. U.S. Secretary of State Michael Pompeo said in a March tweet that “the regime’s concerted effort to lift U.S. sanctions isn’t about fighting the pandemic. It’s about cash for the regime’s leaders.”

— With assistance by Grant Clark