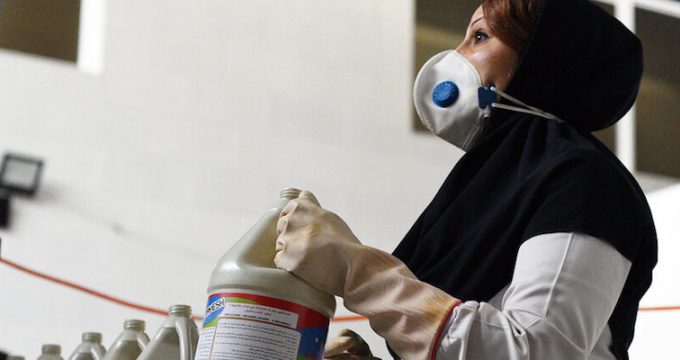 Bourse and Bazaar | Mohammad Hashemi: It may be springtime, but the nights are still chilly in Shiraz. It is 2:30 am. The streets of Iran’s fifth largest city are deserted and Ali Mousavi and his team of volunteers are walking along the boulevards and back-alleys with their disinfection equipment.

Shiraz has been an epicenter for cases of COVID-19 in Iran. Less than two weeks ago the city council wrote a letter to Iran’s president, Hassan Rouhani, expressing grave concerns over the soaring number of the new cases and calling for the government to take more serious action.

But many Shirazis were not content to wait for government interventions that tend to arrive slowly and often fail to provide adequate support. Mousavi, who is a lecturer at a local university, decided to take matters into his own hand by launching a volunteer effort, as they had last year in response to the deadly flash floods that hit Shiraz.

Mousavi and his team began disinfecting neighborhoods just a few days after Iran officially disclosed its first cases of COVID-19. Starting with two groups of 20 volunteers, there are now over 300 people contributing their time. Mousavi reports on the group’s efforts on Twitter.

The volunteers have also helped with the production of protective face masks and hand sanitizer. “A local factory was understaffed and we could contribute manpower,” Mousavi explained. “With the coordination of Shiraz University of Medical Sciences, our team started working at the facility in three shifts producing 20,000 disposable surgical masks daily to meet the new demand.”

COVID-19 has killed over 3,603 in Iran and the country has registered more than 58,000 cases of the illness, with 2,483 new cases announced just yesterday.

The government’s slow response to the virus allowed it to spread unhindered for several weeks before serious action was taken.

As the toll from the outbreak continues to mount, already diminished stockpiles of critical medical equipment are nearly depleted. To make matters worse, the Iranian government faces a significant budget deficit as a result of a collapse in the global oil price, a fall in regional trade, the pressure of U.S. sanctions, and fiscal mismanagement.

Faced with the gravity of the situation, members of Iranian civil society and private sector business leaders have joined the fight against COVID-19, seeking to address gaps in the government’s response.

Groups of concerned citizens have organized in dozens of cities across Iran, mobilizing to support sanitation efforts, to increase production of critical supplies, and to deliver groceries and medication to the homes of those most vulnerable to infection, including the elderly and those living in underprivileged communities.

A group of young seminary students in Mashhad were lauded after they volunteered to wash the bodies of coronavirus victims before burial, in keeping with Islamic custom—a risky job that few people were willing to do.

Volunteers are working selflessly, putting themselves at risk to help people in need, explained Mousavi, describing it as the “right spirit.” When asked whether any of his volunteers had been infected, Mousavi responded “no one so far, thank God.”

Mousavi and his team, like many similar groups around the country, are funded by donations. “Many people think we receive financial help from the government or military institutions, but in reality we receive limited support from those bodies.” He presents a receipt for a purchase of 400 pairs of industrial gloves for his disinfection teams, paid for by donations.

So far, Mousavi has collected around USD 20,000 in donations to purchase food and basic supplies for vulnerable households, especially those families that have lost their breadwinners to COVID-19.

Perhaps the largest philanthropic campaign under way in Iran is the Nafas Campaign (nafas means “breath” in Persian, but it is also the base of the Persian idiom for “trust in oneself”). Launched in late February, over 200 companies from Iran’s private sector have joined the campaign, coordinated by chambers of commerce and the philanthropic arms of several of Iran’s largest firms. Together, the members have donated over USD 1,000,000, medical equipment, in-kind services, and cash assistance to help fight COVID-19.

The Nafas Campaign has managed to supply ventilators to hospitals across the country. Last week, the campaign donated 55 ventilators, valued at around USD 350,000, to hospitals in Golestan, a province facing one of the most severe outbreaks of COVID-19 in the country.

Hospitals are also facing unprecedented demand for medical oxygen cylinders—and the Tehran Compressed Gas Association has stepped-up. Mahrad Ebad, vice chairman of the association, described a market under strain. “Unfortunately, in recent months, oxygen cylinders have been in short supply in Iran for variety of reasons, including high demand, sanctions pressures, and the depreciating rial. Prices have skyrocketed and we are seeing cylinders sold at prices as high as 2 to 3 million toman (USD 125 to USD 185).”

“Within the framework of our support to the Nafas Campaign, we have procured and donated over 1800 oxygen cylinders for use at hospitals across the country.” Ebad added.

Medical systems around the world are scrambling to procure N95 masks used by healthcare workers to protect themselves from the risk of infection. Tapping into the supplier relationships of its member companies, the Nafas Campaign has imported over 500,000 N95 masks from China, with another 120,000 masks slated to arrive in the coming days.

The Nafas Campaign’s flagship project was the construction of the Nafas Clinic, a center where patients can be tested for COVID-19 and other acute respiratory disease. Built in just eight days, the clinic, located in Tehran’s Sadeqieh square and adjacent to Ebnesina Hospital, has the capacity to test 300 patients daily and is open 24 hours, seven days a week.

Despite these successes, campaign members continue to be disappointed by the bureaucratic hurdles and lengthy custom clearance procedures that have delayed delivery of critically needed items to hospitals. “It is unacceptable that such key supplies are held for days merely for certain bureaucratic processes while our medical centers are facing shortage of protective gears,” said Farzin Fardis, communications director for the campaign. The campaign has called on the government to reduce the red tape.

Fadis believes the campaign is pioneering a new model of civic action, and the private sector nature of the initiative has enabled donations to be solicited from Iranians abroad. “The fact that so many businesses have come together to cooperate in civic activities as part of this campaign, sets an important precedent in Iran and we hope that when the coronavirus crisis is over, this campaign will be considered a successful model for such efforts.”