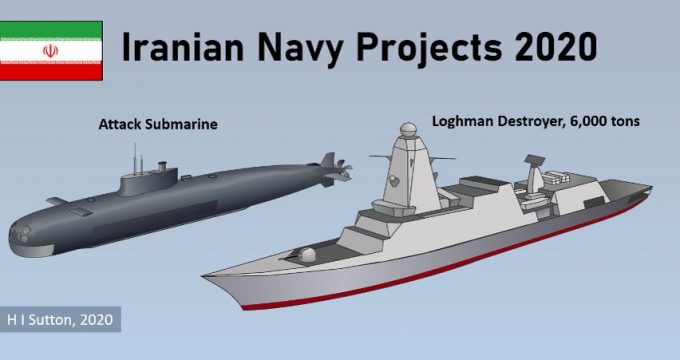 “Giant submarines” likely refers to normal size boats in other navies. Iran is experienced at building submarines with the 527-ton Fateh Class being their main achievement. Logically the new boats will be larger follow-ons, possibly in the range of 2,000 to 3,000 tons. This is similar to the three Russian-built Kilo class submarines already in Iranian service.

They have also built a number of midget submarines, including the lone Nahang (whale) class and the mass produced IS-120 Ghadir class. The Ghadir is based on the North Korean MS-29 Yono design, the type believed to have sunk the South Korean warship Cheonan in 2010.

The larger size will enable more weapons to be carried, more powerful sonar and longer patrols. Iranian submarines are equipped with locally built heavyweight torpedoes and a unique type of lightweight anti-ship missile. It is unlikely that they carry the much discussed ‘Hoot’ supercavitating torpedo though.

There has been talk about Iran building nuclear-powered submarines. Rastegari said that Iran has the capability to do so, but that it is not currently planned. By inference the new type will be conventionally powered, meaning that it will have a diesel. When it is underwater it will be powered by heavy duty batteries.

The 6,000-ton destroyer likely refers to the Loghman (meaning Persian Gulf) class. Some Iranian sources suggest that it will be a trimaran, meaning that it has three hulls. This seems unlikely however given the size. In fact it is about twice the size of the ‘Hormuz’ class trimaran unveiled last November. That design resembled the U.S. Navy’s Littoral Combat Ship (LCS). The new design will be closer in size to the U.S. Navy’s Arleigh Burke class AEGIS destroyer. It is likely to be equipped with phased array radars and surface to air missiles in vertical launchers.

Iran has already built a serious of Moudge class ‘destroyers.’ These are only 1,500-2,000 tons, which equates to light frigates by international standards. The type has lacked effective air defenses, something which the Iranian Navy is reportedly addressing.

Iran has a history of reporting ambitious defense projects that ultimately do not materialize. Many of those projects may be intended for internal propaganda purposes because Iran emphasizes self-sufficiency. But the Navy is less prone to exaggeration than some other arms, notably the IRGC (Islamic Revolutionary Guard Corps) so these claims have greater credibility. And Rastegari has made similar comments last year, but these appear more firm. Construction of the destroyer will start within a year, the Admiral said. Whether Iran can realize these plans given its economic challenges remains to be seen.