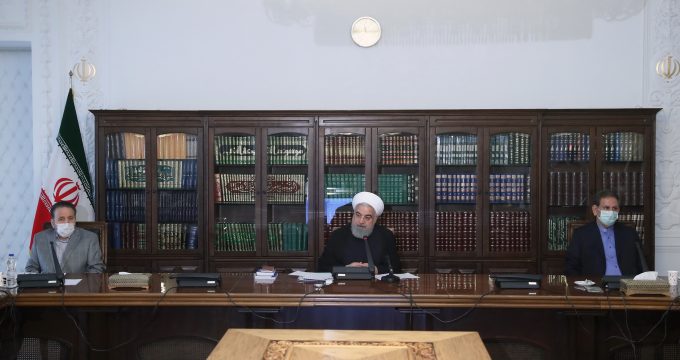 IRNA – President Hassan Rouhani said on Monday that the government has plans to pay loans to 4 million low-income Iranian households as the outbreak of the coronavirus disease (COVID-19) continues.

The president who was speaking during a meeting of a governmental economic coordination headquarters said that the conditions for receiving the loan will be announced soon.

He also said that a €16.5 billion relief package has also been allocated to businesses damaged by the outbreak of the pandemic.

The Iranian president said that small and medium-sized businesses, as well as other businesses with less than 50 workers who were shut down during the disease and refused to fire their workers will receive the relief aid.

President Rouhani also noted that some €1.1 billion has been allocated to the country’s unemployment insurance fund to be paid to those who have lost their jobs during the coronavirus outbreak.

The Iranian president said on Sunday that the meeting of the national headquarters of the fight against coronavirus outbreak had decided to ease some imposed restrictions to slow down the spread of the coronavirus within the next coming days.

Low-risk businesses will resume their activities as of April 11 in different provinces other than Tehran, President Rouhani said, however noting that protocols adopted by the Ministry of Health have to be followed in full.

The resumption of activities of low-risk activities in the capital city of Tehran is allowed as of April 18, the Iranian president added.

He noted that the resumption of activities of high-risk businesses is still forbidden and yet to be decided.

Rouhani underlined that there is no difference between the Ministry of Health and the Ministry of Industry, Mine and Trade over the decisions on the fight against COVID-19.

“Someone at some corner says something to the foreign media and they exaggerate the issue,” he said.

The president said that preferring either health or economic activities over the other one is something wrong and rejected.

Economic activities and health protocols have to be taken into account at the same time while all the people obey the protocols and advice by the Ministry of Health, President Rouhani said.

The Iranian president advised those who are not forced to go out to stay at home, noting that the resumption of economic activities does not reduce the necessity of staying at home.