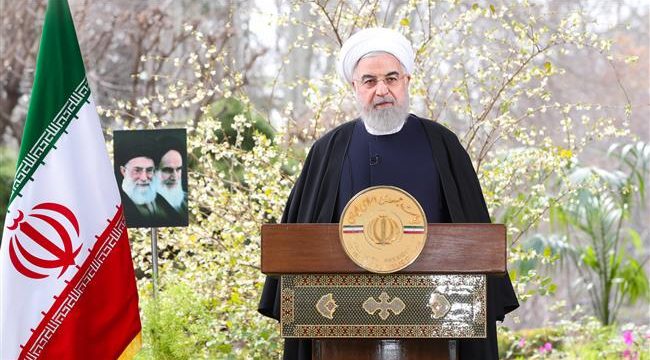 President Rouhani: Sanctions failed to force Iran to give in to US pressure

Press TV – Iran’s President Hassan Rouhani says US sanctions and pressures have failed to force the Iranian nation to give in to Washington’s excessive demands.

“The harshest ever sanctions were imposed against our nation [last year] by global terrorists,” Rouhani said on Friday morning in a message to Iranians on the occasion of New Year.

He added, “Our oil industry came under the most severe sanctions regime in history and pressures were mounted on our economy from all directions.”

The Americans sought to increase pressure on Iran through sanctions in an attempt to force the nation to buckle under pressure, but our great nation resisted and created another epic, the president added.

“We were not defeated; in fact, we stood up against US pressures and resisted,” Rouhani said.

Elsewhere in his televised message, the Iranian president expressed his thanks to people, the country’s medical personnel, including doctors and nurses, and NGOs for their hard work to stem the “destructive” novel coronavirus, or COVID-19.

Iran is battling the coronavirus pandemic under the harshest ever sanctions by the US, which were re-imposed after Washington left a UN-backed landmark nuclear deal between Tehran and major world powers in 2018.

After leaving the landmark nuclear deal, Washington began forcing others to toe its sanctions line. Britain, France, and Germany have stopped their transactions with the Islamic Republic, bowing to the US.

In late January, the United States and Switzerland announced the launch of a channel to ship food and medicine to Iran.

Washington alleges that it has exempted foodstuffs and medicine from its anti-Iran sanctions, something that Tehran rejects as a “brazen” lie as the bans have deterred several foreign banks from doing any business with Tehran.

Iran has written to the United Nations and all international organizations, urging the removal of the draconian measures that have hampered the country’s fight against the virus.