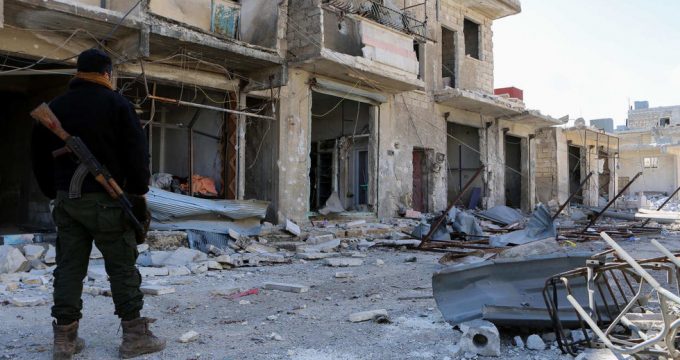 Idlib is a stress test for Iranian-Turkish relations

Atlantic Council | Sina Azodi and Giorgio Cafiero: Iran has done much to buttress President Bashar al-Assad’s government throughout the Syrian civil war. Since the eruption of the Syrian crisis in 2011, Tehran has spent substantial blood and treasure to support its long-time strategic ally in the Middle East. Yet, although the Iranian military and its proxies have mostly stayed out of Idlib province, Tehran has become more focused on this part of Syria, located along Turkey’s southern border, since the start of this year.

In the immediate aftermath of the assassination of Quds Force Commander Qasem Soleimani on January 3, Iran’s hand in Idlib became increasingly visible. Reports indicate that between 400 to 800 fighters from the Fatemiyoun Brigade, an Iranian-sponsored Afghan Shia militia, were present in the northwestern province of Syria in late January. Iran’s growing and increasingly publicized involvement in Idlib was an outcome of Tehran’s desire to find new ways to retaliate against Washington’s interests—which include defending Israel from Tehran-backed factions and preventing, or at least increasing the costs of, a total victory for pro-regime forces—while asserting Iranian influence in Syria in the post-Soleimani era.

The killing of scores of Lebanese Hezbollah members amid Turkey’s ongoing military campaign against the Syrian Arab Army (SAA) and various pro-Assad forces on February 28 raises important questions about how the Idlib crisis will impact Tehran’s relationship with Ankara. There is no denying that events in northwestern Syria pose a difficult dilemma for Iran.

The Islamic Republic would like to see both a total victory for the Syrian government and a continuation of relatively positive relations between Iran and Turkey, which Tehran realizes is an important neighbor and partner particularly when it comes to countering the Trump administration’s “maximum pressure” agenda. However, it may prove increasingly difficult for the country’s leadership to strike this balance depending on how events unfold in Idlib. Despite political tensions with Tehran, Ankara has long tried to maintain cordial relations with Iran, primarily due to economic reasons. As sanctions have gradually increased pressure on Iran, many Iranian citizens have resorted to buying properties in Turkey as a “Plan B” option. In similar vein, thousands of Iranians who visited Turkey annually prior to the coronavirus outbreak substantially contributed to Turkey’s tourism industry. As a result, serious tensions with Iran could easily harm the Turkish economy, which has been suffering from this global pandemic in terms of decreased tourism and trade with neighbors.

On March 1, Iran’s Military Advisory Center (MAC), an IRGC-affiliated entity in charge of coordinating Iran’s operations in Syria, came under the Turkish military’s attacks in Syria. As a result, the MAC issued a statement calling on Ankara to act “wisely” in Idlib and make moves which serve the interests of the Syrian people. The statement condemned Turkey for backing groups recognized by Iran’s government as terrorist entities, including al-Nusra Front and the Turkestani Islamic Party, and also credited the MAC for helping the SAA protect the M5 highway from the Syrian government’s enemies. Moreover, the MAC warned that Iranian forces in Idlib have the means to retaliate against the Turkish military if Ankara continues down its path of aggressively targeting the SAA and its allies. “Their sons [of the Turkish people] are targets to our fighters on the ground. . . We stay with the Damascus forces and government to free the remaining militant-held part of the country. We underline our support for Syria’s territorial integrity,” the statement warned.

As Iranian President Hassan Rouhani has emphasized, Tehran is determined to prevent the Astana Process—which aims to bring an end to the Syrian civil war—from falling apart so that Iran, Russia, and Turkey can continue their diplomatic efforts to resolve the conflict. Both Tehran and Moscow recognize that working with Ankara is essential as Turkey, by virtue of its long border with Syria and ties with anti-Assad groups, can play spoiler to any Iranian and Russian plans in Syria. A grave concern for Tehran is that recent events in Idlib are pushing Turkey away from the Astana Process while gradually realigning Ankara more closely with the United States, other NATO allies, and Israel. The clashes between the Russian-backed SAA and the Turkish military on February 27 have only added to the concerns that the process is falling apart. In the meantime, the Trump administration is debating the selling of patriot missiles to buttress Turkey’s air defense. Ironically, prior to the recent developments, Ankara was at loggerheads with Washington over the purchase of the S-400 air defense system from Moscow.

How Russia plays into the Iran-Turkey relationship

The situation in Idlib will impact Iran’s partnership with Russia in ways that are likely yet to be realized. Last year, as the SAA and its allies were taking back territory from anti-Assad groups, there were increasingly relevant questions being debated by experts about how and when Tehran and Moscow’s conflicting interests vis-à-vis “post-conflict Syria” would play out. In February and earlier this month, Iranian officials were disappointed with the Kremlin for—at least in Tehran’s eyes—failing to sufficiently defend Syria from Ankara’s “Operation Peace Shield”. Now that the March 5 deal—also known as Sochi 2.0—between Turkey’s Recep Tayyip Erdogan and Russia’s Vladimir Putin demonstrated Moscow’s continued will to serve as a “brake” on Ankara and Damascus’s standoff in Idlib, some Iranian confidence in Tehran’s partnership with Russia could be somewhat restored.

Metin Gurcan, a Turkish security expert, asserts that the Russian and Turkish governments at the Sochi 2.0 meeting merely created a pause in fighting rather than a permanent solution to the complicated crisis in Idlib. If or, more likely, when the combat resumes, major dilemmas will arise for Ankara, Damascus, Moscow, and Tehran. Under such circumstances, how Syria intends to position itself between Iran and Russia will be difficult to predict. Nonetheless, as Assad’s government has constantly sought to balance Iran and Russia off each other in order to prevent Damascus from becoming a “puppet” of either ally, a return to the fighting in Idlib could push the Syrian regime closer to Iran depending on what Moscow could or would do to pressure Turkey into ceasing its attacks on the SAA, and Iran-backed groups such as the Fatemiyoun Brigade and Hezbollah.

Amid Syrian-Turkish clashes in Idlib during February, Tehran demonstrated restraint by issuing statements of “concern”. Nonetheless, it would be difficult to imagine Iran not taking additional measures in the future to protect its strategic interests if Turkey returns to hampering on Iranian interests in Syria. Just as Tehran has publicly opposed Turkey’s previous military campaigns in northern Syria—“Operation Peace Spring” in 2019 and “Operation Olive Branch” in 2018, Iran is condemning Ankara’s recent operations in Idlib. The Iranian leadership wants all actors, especially Turkey, to recognize Tehran’s interests in Idlib and respect them.

While Tehran wants to see the maximization of the regime’s gains and elimination of any groups that continue to fight the SAA, the Turks have demonstrated their ability to put new life into the Syrian rebellion through attacking forces loyal to Assad and denying Damascus any easy military victory in Idlib. What remains to be seen is how long the Sochi 2.0 agreement can hold, and how Iran and Turkey would address their opposing stakes in Syria’s “last battle” if the cease-fire ends and more bloodshed ensues with Assad’s government looking to consolidate its control over the entire country with full support from Tehran and Moscow, which Turkey would see as a disaster in terms of the movement of refugees from across Idlib to the Turkish border.

The developments which have unfolded in Idlib throughout 2020 have thus far put Iran and Turkey in extremely difficult situations. On the one hand, after spending a tremendous amount of blood and treasure in Syria, the Islamic Republic cannot sit idly while Turkey collects the spoils of war. Yet, on the other, Tehran does not wish to antagonize its western neighbor and friend in West Asia. Without question, Iran faces a major challenge in relation to northwestern Syria that will require officials in Tehran to navigate cautiously with so much at stake for the Islamic Republic as the Syrian conflict rages on with much attention on Idlib. In terms of relations between Iran and Turkey, while both countries have vested stakes in continuing to cooperate in the many areas where their interests overlap, there is no doubt that the lack of a political solution to the crisis in Idlib will create a major source of stress in bilateral relations throughout 2020.

Sina Azodi is a foreign policy advisor at Gulf State Analytics, a Washington-based geopolitical risk consultancy. He is also a PhD candidate in international relations at University of South Florida.

Giorgio Cafiero is the CEO of Gulf State Analytics.