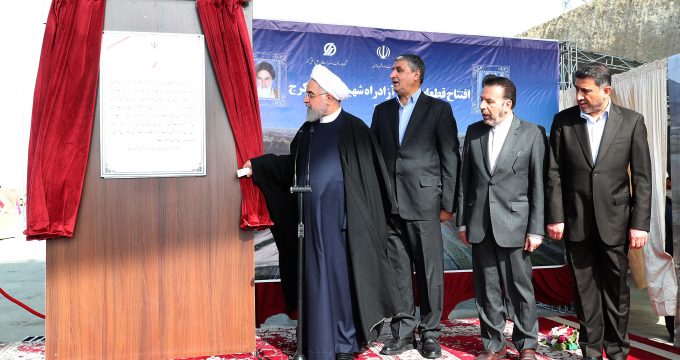 MNA – Hemmat-Karaj Freeway was put into operation today in the presence of President Hassan Rouhani.

“The launch of Lot No.s 2 and 3 of Shahid Hemmat – Karaj Freeway is the outcome of nonstop and unflinching efforts of domestic engineers after years of expectation to inaugurate this giant project,” Alborz Coordinating Deputy Governor for Development Affairs Ali Darvishpour told reporters on Tuesday on the sidelines of the inauguration ceremony.

As long as 14.5 km, this project has been constructed in six lanes, he added.

As one of five important freeway projects, the inauguration of Hemmat-Karaj Freeway was put at the top priority of the government in organizing traffic congestion on Tehran-Karaj Road and the provision of financial resources and materials needed in this project.

This freeway is a complement to the international East-West corridor, he said, adding, “with the inauguration of this project, in addition to reducing travel timespan and increasing of safety, we will witness a reduction of traffic congestion in Karaj with the connection of new road to Chalous as well as facilitating access of residents in Karaj to the northern provinces and Tehran.”