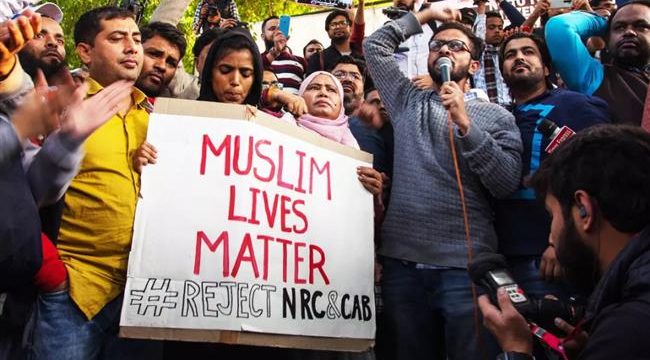 Press TV – A group of Iranian lawyers and attorneys, known as Lawyers Without Borders, has condemned violence against Muslims of India, urging the country’s Bar Council to uphold their rights.

In a Monday letter to Chairman of the Bar Council of India Manan Kumar Mishra, the Lawyers Without Borders expressed concern over the “significant and unjustified violence by extremist Hindu groups” against Muslim protesters, who were peacefully objecting to the newly-passed controversial “Citizenship Act”.

“Apparently the security forces have not been able to control the violence and some of the extremists have been backed up so that security in some areas in New Delhi has been endangered,” the letter reads.

The letter warns about the grave consequences of such policies, emphasizing that the “discriminatory” law has raised international concern.

“It is clear that the Citizenship (Amendment) Act distinguishes between refugees of Hindu, Sikh, Buddhist, Jain, Parsi, Christian religion and Muslims in accepting Indian citizenship. It subsequently discriminates between refugees based on their religions and can be considered as a discriminatory act,” the letter added.

It went on to say that Muslims in India have used their fundamental right to peaceful protest, but have faced “violent and inhuman treatment”.

“Some Hindu extremist groups have taken advantage of this situation and resorted to violent and inhuman treatment of Muslims whether they had objected to the law or not, and thus have turned such a peaceful protest into a conflict between Muslims and Hindus,” it reads.

The Lawyers Without Borders reminded the chairman of India’s Bar Council that the current violence and discrimination against Muslims is “clearly in contradiction with the UN Charter and the fundamental human rights instruments”.

It also expressed the hope that the “prestigious” Bar Council of India will “take fundamental steps to uphold the rights of people, especially Muslims, and help to reduce violence.

The letter finally requests the Indian officials to take the necessary steps to end serious concerns of the international community about the situation of India’s Muslims in India.

As Hindu extremists targeted the Muslim minority in the capital last month, the Indian police engaged in direct violence against Muslims and helped Hindu mobs in their atrocities against Muslims, or just stood aside watching, a report showed last week.

The New York Times in a report on Thursday presented newly-emerged evidence of Indian police directly engaging in violence against Muslims or actively helping the Hindu mobs during rampages in the capital late last month, when they torched Muslim homes and targeted Muslim families.

Critics insist the law is discriminatory, coming in the wake of other severe government measures against the country’s Muslim population such as the withdrawal of autonomy for Muslim-majority Jammu and Kashmir.

There are 200 million Muslims in India, comprising more than 14 percent of the country’s population.

Critics of Modi’s government have blamed the anti-Muslim violence on members of the prime minister’s Bharatiya Janata Party (BJP), which was crushed in local Delhi elections early last month. The party has embraced a militant brand of Hindu nationalism and its leaders have openly vilified Indian Muslims.