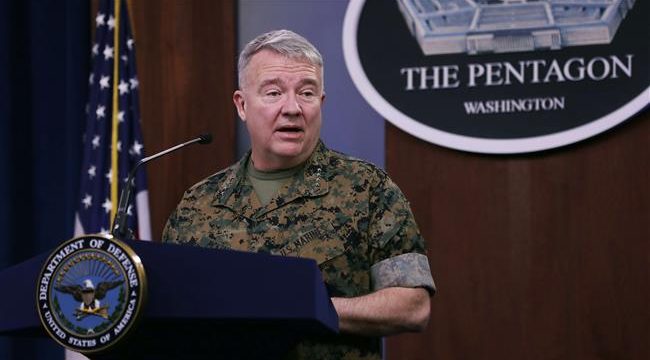 Press TV – The US military plans to keep two aircraft carriers in the Persian Gulf region, the commander of US Central Command (CENTCOM) has announced, claiming the move is aimed at deterring Iran from taking retaliatory action for what he described as “defensive” air strikes against Iraqi installations days ago.

“We’re going to keep [the carriers] for a while” to signal to Iran that retaliation would bring a massive response, said Marine Gen. Frank McKenzie at a Friday news conference in the US defense department, referring to USS Eisenhower and USS Truman warships and alleging – without providing any evidence – that a recent attack on US-occupied Taji military base near Baghdad was conducted by what Washington commonly propagates as “Iran-backed militia” in Iraq.

According to the US-based military news outlet Task & Purpose, when McKenzie was challenged by its reporter on the “defensive” nature of the American air strikes on installations of Iraqi military’s Popular Mobilization Units across the country, he insisted on his claim arguing that they strikes would effectively “prevent future attacks” on US forces.

“Actually… I think these attacks are designed to prevent future attacks on us, which would be the definition of a defensive action. Clearly, dropping a bomb is in of itself an offensive tactical action – but in the broader context these are designed to be defensive strikes,” said the hawkish CENTCOM commander.

According to Iraqi officials, three Iraqi soldiers, two policemen, one civilian and no “militiamen” were killed during the US air strikes, which Baghdad censured as a violation of its sovereignty and targeted aggression against its regular armed forces.

The report further underlined that while the US military has attributed “a total of 12 rocket attacks” on US-led coalition forces in Iraq over the past six months to the nation’s PMU forces, McKenzie “did not elaborate on what evidence he based that conclusion on.

The report then quoted McKenzie as saying that US military officials also believe that the recent airstrikes on PMU’s installation will “have an effect on deterring future strikes of this nature.”

“We’ve seen in the past what happens when you don’t respond,” he said. “Now people know that we’re not going to tolerate these direct attacks on American or coalition service members – and we’re willing and able to respond.”

On Saturday, however, multiple rockets struck the US-occupied Taji military base yet again, according to press reports citing Iraqi and US security sources, adding that three American troops and several Iraqi forces were injured in the apparently retaliatory attack.

Iraq’s Joint Operations Command later announced that 33 Katyusha rockets were launched near a section of the Taji base that houses US-led coalition forces in the country. It further noted that the military found seven rocket launchers and 24 unused rockets in the nearby Abu Izam area.

Pointing to US insistence that its latest aerial strikes on Iraqi military targets would deter future attacks on its forces, a Reuters report on Saturday said, “Not only did the [US] retaliatory strikes appear to fail to stem more attacks on the US-led coalition, Iraqi government protested the American air strikes and said members of its security forces were among the dead.”

This is while the Pentagon further declared that two of the three wounded US troops were seriously injured in the rocket attack and are being treated at a military hospital in Baghdad.

Pentagon spokesman Jonathan Hoffman, however, refused to speculate on potential US responses but, in a statement, cited Defense Secretary Mark Esper’s warning last week that “you cannot attack and wound American Service Members and get away with it, we will hold them to account.”

Meanwhile, the Iraqi military also stated on Saturday that neither the United States nor other foreign forces should use the latest rocket attack as a pretext to take military action without Iraq’s approval, and should instead hasten to implement a parliamentary resolution expelling them.

US claims Iraqi officials notified prior to airstrikes on its forces

However, McKenzie claimed on Friday that the US military had notified the Iraqi government after the Camp Taji attack that “a response was coming,” though he did not specify whether Iraqi officials were given advance warning of the five airstrikes across the country.

McKenzie then went on to openly ridicule Iraq’s security officials, saying: “If Iraqi military forces were there, I would say it’s probably not a good idea to position yourself with Kata’ib Hezbollah in the wake of a strike that killed Americans and coalition members,” referring to one of the country’s resistance groups that fiercely opposes US military presence in their soil.

The top US commander in the Middle East then went on to threaten Iran by claiming that he believes Tehran may seek to provoke Iraqi forces to take action against American targets in the region, adding: “I would caution Iran and its proxies against an attempted response.”

“I think the threat remains very high,” he further emphasized.

In another warning, McKenzie also claimed that US intelligence has a good idea on where Iraqi militia groups are located, insisting: “We think we know where most of them are. There are plenty more places where we can go to work.”

He further tried to undermine Iranian military’s capabilities after American terrorist forces assassinated Iran’s revered anti-terror Quds Force commander, Gen. Qassem Soleimani in early January during an official visit to the Iraqi capital of Baghdad, saying that it was difficult for the Islamic Republic to replace him.

McKenzie also claimed that the corona virus outbreak in Iran has taken a toll on the Iranian leadership, emphasizing that “it’s going to make it a lot harder for them to make decisions.”

The CENTCOM commander then went on to announce that the US is in the process of moving Patriot anti-missile batteries into Iraq, adding it will be “some days” before they became operational.

He then tried to undermine the destructive Iranian ballistic missile attack against the US-occupied al-Asad military air base in Iraq’s Anbar province on January 8 that shocked the American forces there and leaving yet unknown number of casualties.

Washington initially claimed the attack did not leave any casualties but later admitted that some of its forces sustained “traumatic brain injuries,” raising the number of injured troops several times from eight to more than 100.