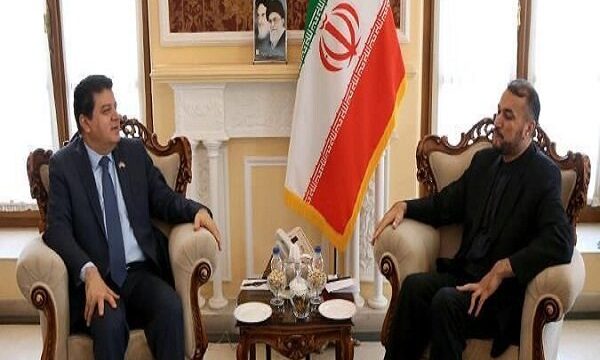 Syria eager to use Iran’s experience in coronavirus battle

Tasnim – Syrian Ambassador to Tehran Adnan Mahmoud voiced his country’s willingness to employ the experience of Iran in fighting against the novel coronavirus that has affected many countries.

In a meeting with Hossein Amir Abdollahian, a senior assistant to the Iranian Parliament speaker in Tehran, Mahmoud stressed the need for mutual cooperation with Iran in the battle with COVID-19.

He also called for taking advantage of the Islamic Republic’s experience in containing the coronavirus epidemic.

The ambassador further noted that Syria owes its success in defeating terrorism to the sacrifices made by its army and the support provided by Iran, Russia and the Lebanese Hezbollah.

Mahmud also called for the expansion of economic cooperation between Damascus and Tehran and holding of the Joint Economic Commission considering the economic war that the enemies have waged on Syria and Iran.

For his part, Amir Abdollahian congratulated Syria on its victories over terrorist groups in Idlib, emphasizing the necessity for the political settlement of the crisis there.

He also highlighted the significance of the trilateral negotiations among Iran, Turkey and Russia, saying the agreements reached in the Astana Process and the Sochi meetings must be preserved.

Iran, Russia and Turkey are guarantor countries that brokered a ceasefire in Syria in December 2016, leading to the Astana talks.