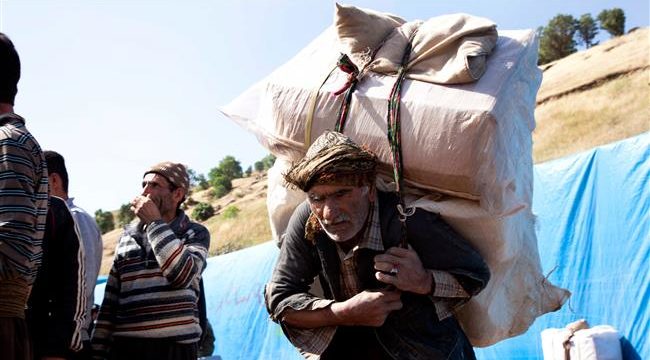 Al-Monitor | Dana Taib Menmy: Work can be dangerous for the Kurds hired to carry goods across the Iran-Iraq border. “Facing harsh weather, topographic conditions and gunfire, we risk our lives to barely provide our family’s daily bread,” an Iranian Kurd recently told Al-Monitor via a messaging app. Many of these couriers, called kolbars, feel they have little choice.

The couriers traverse snow-covered mountainous routes while wary of Iranian border guards’ bullets and schlepping giant loads on their backs, or guiding animals, to make a few dollars a night. On Feb. 16 in Nowsud, guards opened fire on a group of kolbars, killing three and seriously wounding six. Another shooting incident, on Feb. 28, left two kolbars injured.

The number of people working as kolbars is increasing as the long-running economic crisis in Iran continues to deepen, exacerbated by mismanagement, corruption and US economic sanctions. Violence against couriers has also been on the rise.

In January, the Kurdistan Human Rights Network (KHRN) reported that in 2019, Iranian soldiers and border guards killed 57 people. Another 22 died from such tragedies as avalanches, falls from high passes, buried explosives detonating, and vehicular accidents during police chases. KHRN said 66 others had been injured.