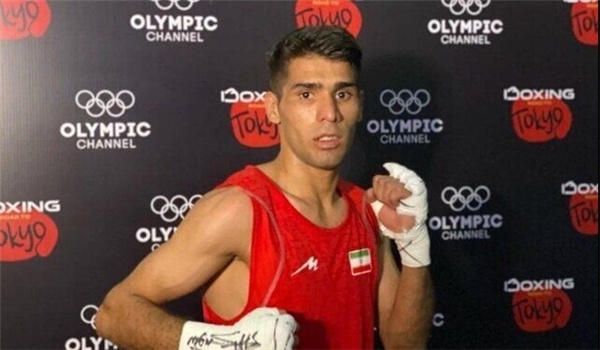 FNA – Featherweight boxer of Team Iran Danial Shahbakhsh managed to defeat his rivals in the Jordanian capital city of Amman on Wednesday to secure a berth at the Tokyo 2020 Summer Olympics Games.

Iran’s boxer Shahbakhsh won against Yu Sing Tso of Hong Kong today and secured a berth at the Tokyo Olympics 2020.

The Olympic Boxing Qualification event is underway in Amman, Jordan. Iran has sent eight boxers to participate in the tournament.

Tso, who was unbeaten in 22 paid fights, learned a boxing lesson by the 19-year-old Shahbakhsh, who delivered a brilliant performance and won all the three rounds decisively.

Scoring a box-off victory, he claimed a spot in the men’s featherweight (57kg) division at the 2020 Asia & Oceania Qualification Tournament.

The other members of the Iranian boxing team, headed by Alireza Estaki, who will fight against rivals later today include Ashkan Rezaei (63kg) and Shahin Mousavi (75kg).

A total of 151 boxers from 35 countries have participated in the event that concludes today (March 11).

Iran is scheduled to compete at the 2020 Summer Olympics in Tokyo from July 24 to August 9.

Final round of the competitions was held in Istanbul on Saturday. Iran was represented by three boxers in final that initially Moslem Maqsoudi lost to Moroccan rival and won silver medal.

Finally, Omid Ahmadi-Safa and Toufan Sharifi in 52 and 91 kilograms, respectively, conceded defeat against their Mongolian and Algerian rivals and grabbed silver medals.