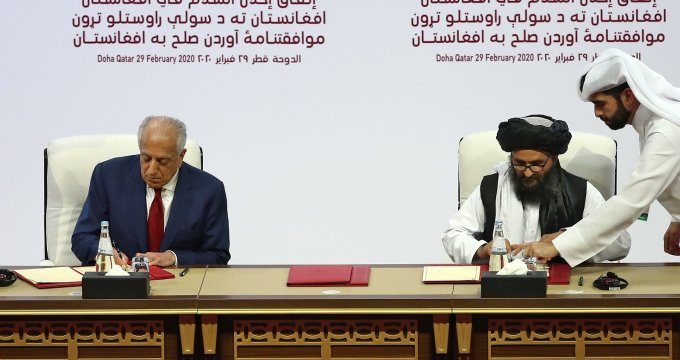 What the US-Afghan agreement means for Iran

Al-Monitor | Hamed A. Kermani: The month of February came to a close with a watershed event: The United States formally signed an agreement with the Taliban, the Islamist militant group it has been fighting in Afghanistan since October 2001. US Secretary of State Mike Pompeo met Feb. 29 with Taliban delegation leader Mullah Abdul Ghani Baradar in Doha, Qatar, and announced the agreement, which Baradar and veteran US diplomat Zalmay Khalilzad signed. The ceremony followed a “reduction in violence” agreement that took effect Feb. 21.

Advocates of these agreements believe they will pave the way for US and other foreign troops to gradually withdraw from Afghanistan within 14 months, heralding the end of the 18-year war that Doug Bandow of the Cato Institute has pointed out has lasted “longer than the Civil War, Spanish-American War, World War I, World War II, and Korean War combined.”

The “end,” however, will come with the United States practically handing the country back to the very group that triggered the war when it refused to hand over Osama Bin Laden in 2001 after the 9/11 attacks. In addition, many Afghans believe the agreement ignores their interests and preferences and sells out the Kabul government to Islamic militants for the sake of a US withdrawal as soon as possible. The Associated Press cited two anonymous sources as saying that Pompeo himself had been reluctant to attend the signing ceremony and that he only did so at President Donald Trump’s insistence. Putting aside whether the agreement will meet American or Afghan expectations, there is another valid question: What’s in it for Iran?