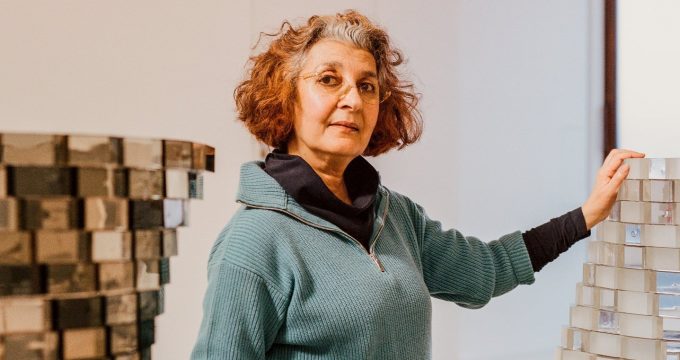 As tensions rise with Iran, so does interest in art it inspired

The New York Times | Farah Nayeri: The Iranian artist Shirazeh Houshiary works out of a luminous studio in a leafy corner of southwest London. Her misty abstract paintings evoke the galaxy, the cosmos, the afterlife. To make them, she floods the canvas with water, pours pigment over it and draws tiny marks over the dried surface.

“Abstraction is one of the most sophisticated ways of coming to feeling, like a piece of music: You have tone, color, rhythm, so many things that touch you right inside,” she said in a recent interview at her studio, where she tiptoed around in striped socks. “I really want to get to the core of what I don’t know. And what I don’t know fascinates me more than what I know, even about myself.”

Ms. Houshiary, who moved to London in 1975, is one of a number of Iranian-born artists to have solo exhibitions in the United States this year. Her show at the Lehmann Maupin gallery in New York opens May 1.

Like many of her peers, she left the country around the time of the Islamic Revolution of 1979 and settled in the West, as political conditions in Iran made it hard for artists to live and work there. While she steered clear of figuration, other artists in exile have tackled political themes by representing veiled women and religious fervor in their work. Among them is the video artist and photographer Shirin Neshat, who is based in the United States and whose retrospective just ended at the Broad in Los Angeles and opens in February 2021 at the Modern Art Museum of Fort Worth. With the animosity between the governments of the United States and Iran now at a peak, these representations are finding a bigger platform in American museums and galleries.

Joanne Heyler, founding director of the Broad, said in an email that when Ms. Neshat’s retrospective was in the planning stages, she hoped it would “lead to a wider reflection on the history of the United States and Iran as well as on the contemporary immigrant experience.” She noted that Ms. Neshat was based in Los Angeles, a city with the largest population of Iranians outside Iran (half a million Iranians live across the United States), and many shared the artist’s experience of leaving their country around the time of the revolution and the Iran-Iraq war in the 1980s. “The events of that time were seismic and continue to impact global events, yet it is a story not well known by Americans, especially younger Americans.” 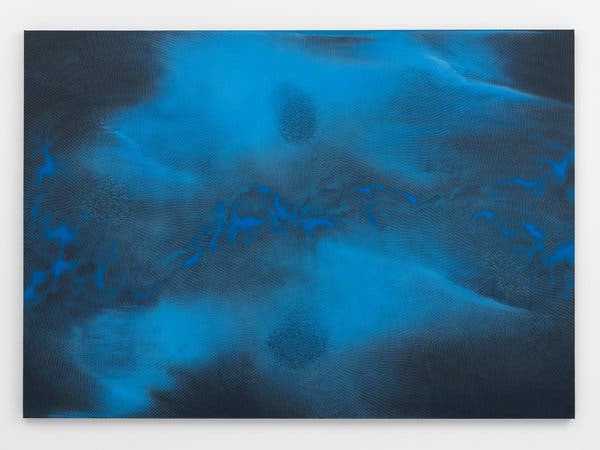 Ms. Houshiary, who was nominated for the prestigious Turner Prize in 1994, moved to London to escape Tehran — the “colorless” capital that her family had moved to — and school, where teenage classmates displayed a sudden thirst for revolution that she did not share. She enrolled in art school and became drawn to minimalist sculpture, and in her degree show, she exhibited an enclosure of darkness and light that drew coverage from The Financial Times. Soon afterward, she signed on with London’s Lisson Gallery. Her best-known work to date is a stained-glass window inside a London landmark: the church of St.-Martin-in-the-Fields, off Trafalgar Square.

The year of the revolution, another future member of Iran’s artistic diaspora was born in Tehran: Amir H. Fallah, a figurative painter now based in Los Angeles. Because of the political turmoil in Iran, Mr. Fallah had a much more unstable childhood. He grew up at the height of the Iran-Iraq war, when aerial bombings often forced families to take refuge in bunkers stocked with cans of food.

When the family decided to move to Austria, they entrusted their savings to a distant relative who ran off with the money, leaving them stranded for two years in Turkey. “We went from middle class to abject poverty overnight,” he recalled in a telephone interview.

Settling in Virginia, the family eventually regained its former status. After graduating from the University of California, Los Angeles, Mr. Fallah started exhibiting in Dubai in the United Arab Emirates in 2005. His first large-scale exhibition is at the Museum of Contemporary Art in Tucson, Ariz., through May 3.

“I don’t feel 100 percent anything, really, and I feel like I’m in a state of limbo, which is fine with me: I think that’s where richness lies,” he said of his multiple cultural identities. As a dark-skinned Iranian, he said, he suffered racism. “A lot of Iranians get a cultural pass because they can pass off as white, but I never had that experience,” he said.

His acrylic paintings are decorative and ornate, a bridge between two worlds. “For me, it’s interesting to mash up a detail from a Persian miniature or a Persian rug with a 1980s skateboard graphic, or references to graffiti art or graphic design and pop culture, because that’s kind of what I am,” he explained.

In his earlier body of work, faces are concealed with a bandanna or a scarf. “When you can’t see somebody’s physical features, then you have to focus on the other things around them,” he said. “It goes back to my own identity. People are always misreading me because I’m dark-skinned. That’s kind of where this comes out of.”

Mr. Fallah said the art world was focused on “areas it’s been neglecting,” such as African-American and Latino artists, and “some of that does trickle down to Iranian artists. But honestly, I haven’t seen a big boom.”

In the international auction world, prices of Iranian modern and contemporary art are not comparable to their Western counterparts. The most expensive work by a living Iranian artist is Parviz Tanavoli’s bronze sculpture “The Wall (Oh Persepolis)” (1975), which sold in 2008 for $2.84 million. Other modern artists popular with collectors include Monir Farmanfarmaian, Siah Armajani (who had a show at the Met Breuer last year) and modern masters such as Bahman Mohassess and Leyly Matine-Daftary.

Roxane Zand, Sotheby’s deputy chairman of the Middle East and Gulf region, said that the early 2000s brought “a sudden attention” toward Iranian art but that the 2008 global financial crisis led to a market correction. The situation today is more normalized, she said.

She noted a growing gap between artists of the diaspora and those living in Iran, where economic hardship, sanctions and a collapsing currency mean that artists are unable to buy colors or canvases, or to have their work exhibited by Tehran-based gallerists at international fairs.

The Iranian-born collector Mohammed Afkhami — who will exhibit works from his collection of contemporary Iranian art at New York’s Asia Society in October — said that when he started making acquisitions in 2005, “Iranian art collecting was an exclusively Iranian affair among Iranians.”

Today, Iranian artists are represented by top international galleries, and they are in the collections of the Solomon R. Guggenheim Foundation, the British Museum and the Pompidou Center, he said. Yet, “we are still in the early stages of that diversification away from purely Iranian patronage,” he added.