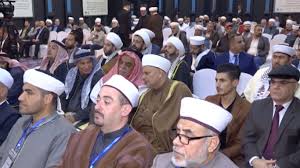 Iran rallies religious leaders to expel US forces from Iraq

Al-Monitor | Hamdi Malik: Iran is continuing efforts to encourage anti-Americanism in the Middle East, especially in Iraq, to secure its own influence and interests.

Dozens of Iran-aligned Muslim scholars from several countries, mainly in the Middle East, gathered Feb. 21 in Baghdad to participate in a forum of the fourth International Conference of Resistance Axis Scholars, an organization that brings together Muslim academics, both Shiite and Sunni, who believe in the goals of the Axis of Resistance led by Iran.

Unsurprisingly, anti-American sentiment dominated the forum. One slogan displayed behind the speakers read, “The exit of American forces is inevitable.” The meeting focused on several issues: Iraq’s sovereignty and the presence of US forces, the state of the Muslim community in general and the Palestinian struggle.

Axis of Resistance, Mujtaba al-Husseini, Soleimani assassination, US withdrawal from Iraq March 6, 2020
Coronavirus primarily affecting small businesses in Iran
On the eve of Putin-Erdogan meeting in Moscow, where is the Idlib crisis at?