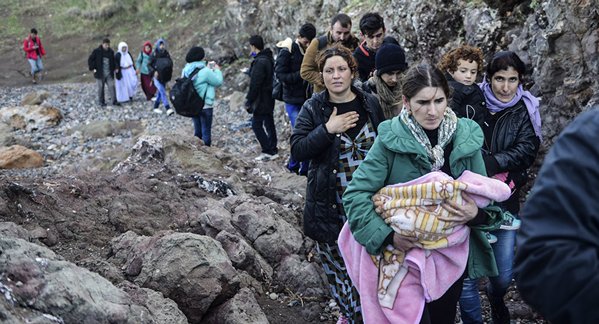 Europe’s migrant crisis: Why Turkey let refugees head for EU and the link with Syria

Euronews | Chris Harris: Turkey triggered a fresh migrant crisis after saying it was unable to stop four million migrants on its territory from heading to Europe.

Here we explain the roots of the current crisis, its link with the conflict in Syria and why Turkey chose to act when it did.

What’s the background to the crisis?

Ankara opened the door for migrants last week after 33 of its soldiers were killed in a Syrian government airstrike in Idlib, north-west Syria.

President Recep Tayyip Erdogan launched a military offensive in the north of the war-torn country late last year, aimed at creating a safe zone to accommodate the 3.6 million Syrian refugees in Turkey.

The other aim was to oust from the Syrian Democratic Forces (SDF), which it considers an extension of the Kurdistan Workers’ Party (PKK). Turkey says the PKK — which launched an armed struggle against the Turkish government in the 1980s in a bid to form an independent Kurdish state within Turkey — is a terrorist organisation.

Why did the death of its soldiers push Turkey to act?

Turkey, which agreed on a deal with Brussels to limit the number of EU-bound migrants in 2016, has long threatened to let refugees head for Europe.

But experts say the death of its soldiers in Idlib was the straw that broke the camel’s back as Turkey’s concerns built up.

Firstly, it wants to draw international attention to the crisis in Idlib, which it fears could send a fresh influx of refugees into Turkey, according to Sinan Ulgen, a former Turkish diplomat and expert with Carnegie Europe.

But it also considers Brussels to have reneged on the 2016 deal and wants guarantees the EU will continue funding the hosting of refugees on its territory.

Other experts say Turkey wants the EU to pressure Russia to stop supporting Syrian government troops and agree to a ceasefire.

What is happening in Idlib?

Fighting in north-west Syria has displaced more than one million people in under three months and pushed them closer to the Turkish border.

Turkey and Turkish-backed proxies have clashed with Russia-supported Syrian government forces, but also a myriad of other military groups, including Shia militias backed by Iran, Ulgen told Euronews.

Why does Turkey want to highlight the Idlib crisis?

Alexandra Stiglmayer, from the European Stability Initiative, says Turkey is already home to four million migrants, 3.6 million of which are from Syria and that Erdogan is under pressure domestically to halt the arrival of any more.

“During local elections last year in Turkey, in which the governing party lost Istanbul, the main opposition party, CHP, campaigned against Syrian refugees and it was successful with that,” she told Euronews.

“So everyone is under pressure domestically to deal with Syrians and one of the ideas was to send some of them back to this safe zone.

“But it’s clearly under pressure to show the [Turkish] population they are not allowing the EU to use us [Turkey] as a dumping ground for refugees.”

In March 2016, Brussels and Ankara reached a deal aimed at controlling the number of migrants heading to Europe via Turkey.

The EU agreed to pay Turkey €6 billion and offered other sweeteners, such as accelerating the lifting of visa restrictions.

But Stiglmayer says the deal has now ended and Turkey has been waiting for a signal the funding would continue.

She said Turkey’s incursion into Syria last October and the handover to a new European Commission means little has been done.

The few European discussions that were held were focussed on reducing how much was being sent to Turkey, she added.

Also part of the deal was a commitment by European countries to take in genuine refugees from Turkey, in exchange for illegal migrants that had reached Europe.

“So far about 30,000 have been resettled in four years,” continued Stiglmayer. “That’s of course below the expectations of Turkey. I mean Turkey has four million refugees and of course 30,000 out of four million is not very many.”

How many of Turkey’s refugees are likely to make a bid for Europe?

Erdogan has said millions of migrants and refugees could be soon heading for Europe in the wake of Turkey opening its border.

But Greece, on the land border at least, has stood firm. It says it has stopped at least 10,000 migrants crossing in the last day.

Stiglmayer slammed Turkey’s “very cynical” use of migrants to make a point but cast doubt on how many would make the trip.

Around 90 per cent of refugees in Turkey are from Syria and they are treated well compared to others, she added.

“There’s probably a buzz among the migrant communities [in Turkey],” she said. “And they sense that there might be another opportunity to get to Europe.

“And I think that more people will mass at the border. And it’s a highly volatile situation because they are angry.

“I think it depends on the individual situation. I’m sure there are Syrian families that have started a new life, which get by somehow. It’s probably not a great life but the kids may go to school, they get social assistance, they have healthcare, they work legally or illegally and get by, they might not go.

“But non-Syrian refugees have far fewer rights. And especially if you’re single, I mean, of course, you would go because in Turkey, they are under pressure to earn money and send money back home.”

What should happen next?

“I think now the ball is definitely in Europe’s court,” said Ulgen. “They have to react to what’s happening.

“And if the reaction takes the form of [showing more solidarity] with Turkey on the refugee issue, then I think these people that are currently stranded in no man’s land [at Turkish-Greek border] will go back to Turkey.

Ulgen also called for a NATO-backed EU mission to calm the humanitarian disaster unfolding in Idlib.

“I think that this is not only a European problem, the world also has to face the situation in Idlib,” said Stiglmayer.

“Because the one million or whatever it is refugees in Idlib are under horrific conditions right now they need aid. And if the fighting continues and more are displaced and they push open the border to Turkey, Turkey also needs three assurances that they will not be left alone [dealing with] the new wave of refugees.

“But EU leaders should sit down with Erdogan and clearly say that support for refugees in Turkey will continue.

“In my opinion, we should even pay more than 6 billion per four years. Because that’s not so much money.”

Stiglmayer claimed paying Turkey to hold onto them cost Europe about €31 per refugee, per month.

“This is cheap for Europe, a refugee in Germany or Belgium, France costs at least €1,500 per month because it’s everything so the healthcare, accommodation, social systems, food, etc. So this is a good deal for Europe and in stocking this up a little bit would still be a very good deal.”